Mr Lynn, heroic Tuskar lightkeeper ... or was he? 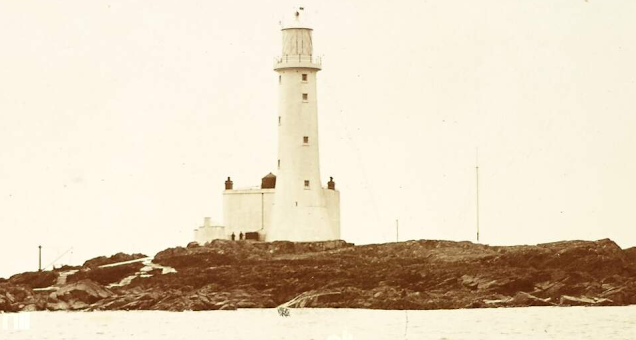 The Tuskar Rock lighthouse c.1906 from the Commissioner of Irish Lights archive in the National Library of Ireland
A few days ago I posted this snippet up on Facebook from the Wexford Conservative 1835 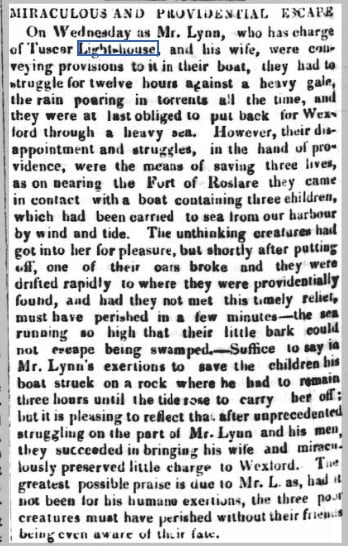 You see, this is my interpretation of the story and it differs very much from the author of the article, not that I'm in the habit of arguing with people who are long dead.
There is no way that Mr. Lynn would have used his own boat to row from Tuskar to Rosslare and back to fetch provisions. Every offshore lighthouse had a tender "belonging to the lighthouse" paid for by the lighthouse service and tendered out to one particular individual, invariably a local boatman. This boatman would row over to the lighthouse with a hand-picked crew - normally between two and six - on a pre-arranged day, once, maybe twice a week to hand over provisions, mail etc. Occasionally, there would be adhoc requests - if clothes were needed on the rock, say, the keeper's wife might ask to go ashore and the local boatman would oblige, naturally, or the Ballast Board wouldn't have renewed his contract.
So when the newspaper talks about 'Mr. Lynn's boat', they really mean the 'lighthouse boat.' Certainly in the twentieth century, keepers were not allowed to have their own boats at offshore lights. Going out in their own boat would have meant leaving the rock and that was a no-no.
So, let us assume Mr. and Mrs. Lynn were travelling in the light tender. They would have had at least two big strapping men doing the rowing, maybe more, and the chief boatman would have been in charge. There probably wouldn't have been a spare set of oars for Mr. Lynn to help out so its doubtful that there was any 'unprecedented struggling' on Mr. Lynn's part. The real heroes would have been the rowers.
So how did the newspaper get it so wrong?
Well, the lightkeeper was a highly-respected member of the community. He wore a uniform and had responsibilities. The rowers were simply part of the great unwashed. For example, in a drowning case  in Lough Foyle, the body was found by "Captain McLoughlin's manservant." A man transporting girders to build the bridge at Tarbert in 1840 was known simply as "a poor man." A mass drowning at the Calf Rock in 1869 was referred to in the papers as happening to Assistant Lightkeeper Richard Howard and six men. No names needed.
I may be doing Mr. Lynn a great disservice here, though I secretly suspect it is "his men" who are being disserved.
At least the kids were saved. 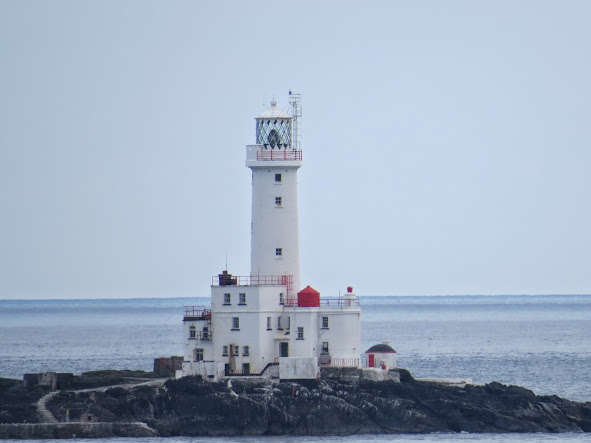 Posted by Peter Goulding at 6:49 AM