Fannet lighthouse and a candidate for the Darwin Awards 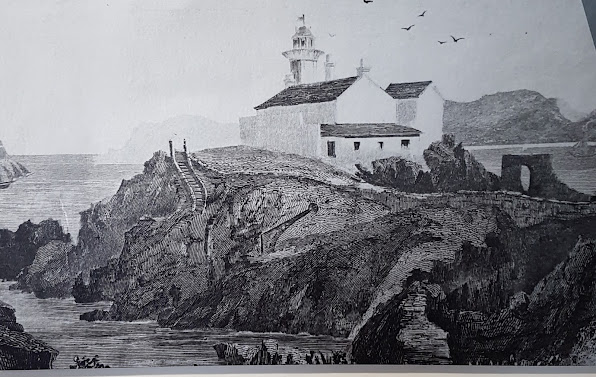 The original lighthouse at Fannet Head in Donegal, serving from St. Patricks Day 1817 to 1886 when the tower was knocked and the new, current tower erected. It was a twin of the lighthouse on Mutton Island in Galway

Okay, this post is not really lighthouse related but its a good story and it made me laugh, despite myself. And there's no harm reiterating the Health and Safety lesson.

A few days ago, as William McCall was fishing near Fannet lighthouse, he caught a small sole fish and, finding it troublesome, put its head into his mouth for the purpose of killing it when, singular to relate, the fish extricated itself from its hold and leaped into his throat. His brother, happening to be near, endeavoured to relieve him but without success. Death from suffocation put an end to his sufferings in a few minutes.

Posted by Peter Goulding at 5:44 AM