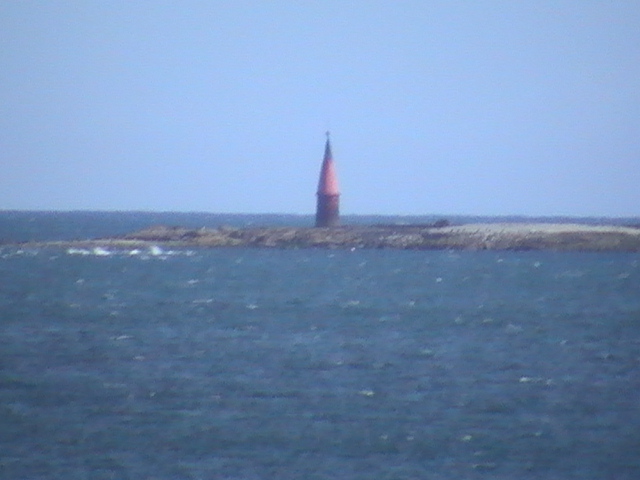 This is the same lighthouse that I was puzzling over here


At the time, I was puzzling over what it was, as there was no mention of it in Trabas. I think I may have found the answer. From CIL "Monday, March 2 2009
The South Rock Lightfloat was permanently withdrawn from station and replaced by a port-hand lateral superbuoy on Wednesday 25 February 2009.A lightship was first established at the South Rock on the 1st April 1877, replacing the lighthouse which had been established in 1797. The lightship was automated and redesignated as a lightfloat, and the crew was withdrawn on 31 March 1982. The South Rock Lightfloat is the last lightfloat in the Service. "


And from http://www.cloughey.org.uk/lightship_going_69.html "The small red ship on the horizon about 3 miles East of Cloughey is to be withdrawn at end of February 2009. It will be replaced by a 'superbuoy' which will not have a fog horn, so the familiar wailing sound heard in the middle of the night will be a thing of the past."
Posted by Peter Goulding at 2:14 PM 2 comments: