Don't mess with that fog signal

Two jolly little stories in the run-up to Christmas, both concerning lighthouse keepers firing fog-guns and both with the keepers' lives being saved by passing ocean-going liners.
The first occurred down at the Tuskar lighthouse on the storm-swept south east coast of Ireland 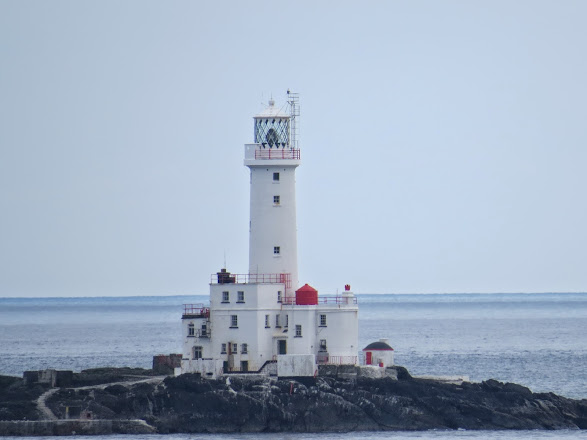 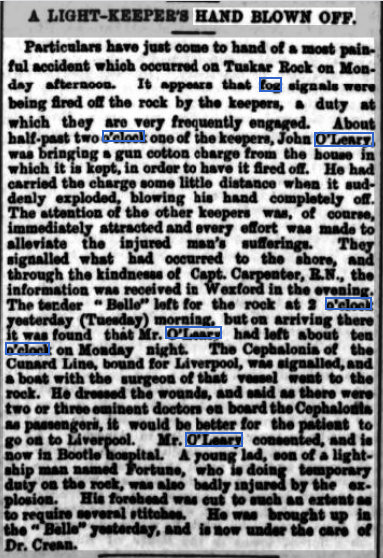 There were questions asked in the House of Commons about this incident and the lack of proper communication between lighthouses and the mainland in cases of emergency but the reply was that the man would have been taken off by the Belle anyway, so the communications worked grand.

Twenty years later, a similar accident occurred at the Rathlin lighthouse. There are currently three lighthouses on Rathlin (four, if you count the lower lighthouse at Rathlin East, below) but at the time there was only one (or two, ditto) 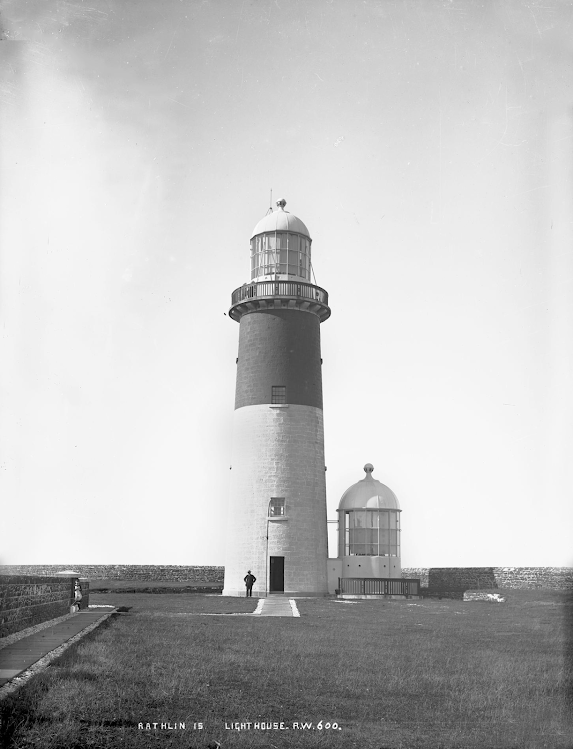 Photo from the National Library 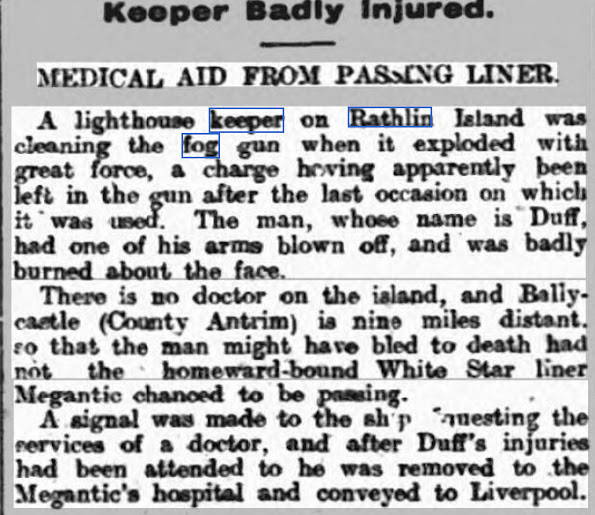 The Strabane Chronicle 20th July 1912
Simply another danger for the lighthouse keeper to endure.
Posted by Peter Goulding at 1:52 AM No comments: 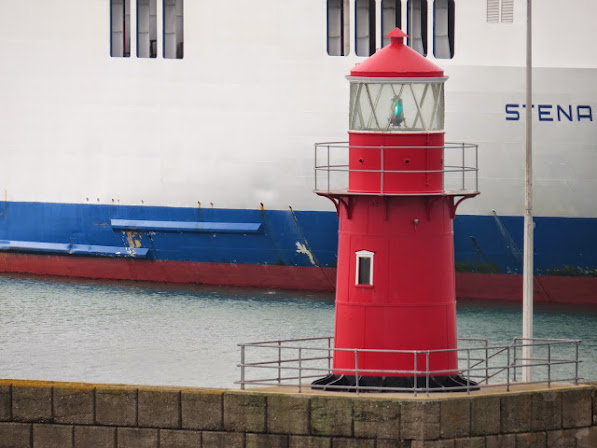 Sadly, I have no picture of the lighthouse at the end of the Ballygeary Pier in Rosslare, so I will brighten up the page by a gratuitous photo of the current, very pretty lighthouse (above), which is the third lighthouse in Rosslare.
The first was at Rosslare Fort at the entrance to Wexford Harbour, long defunct, its circular foundations now lying under the sea.
In between, was the lighthouse at the end of the Ballygeary Pier, which has been stated as being established in 1881, as per the Notice to Mariners below. I have only begun to research this light recently and don't have all the facts but seemingly it was wooden, possibly similar to the East Twin Light up in Belfast. It obviously was pulled down when the current light was established. 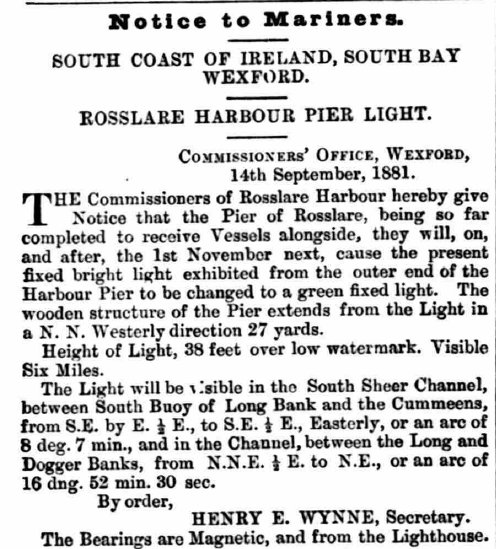 I hope to write more about this light when I have more information (and anybody who can provide any, please get in touch!!) Suffice to say, that the pier was described as ill-fated. Built from The Point and extending 1000 feet out at a cost of £80,000, it was designed as providing a much shorter crossing from Ireland to southern parts of England. However, something happened to the railway line (it was described as 'disused' in 1892) and this hare-brained scheme fell through.
The reason for this post though is a rather wonderful letter, written by one Philip Kennedy, lightkeeper at Ballygeary Pier, in response to an article in the Wexford People on 19th April 1882, just six months after the green light was first exhibited.
The article says the Harbour Board discussed complaints by local mariners to the Wexford Harbour Commissioners that the light could not be seen more than 300 yards away. The explanation was given that the light only shows through one narrow sector. However, it was suggested that someone should go out in the tug-boat Ruby to see for themselves. At this juncture, one of the Commissioners, Mr. Hutchinson, remarked that "the best time to test it is about two o'clock in the morning when the oil is burned low and the lightkeeper, perhaps, asleep" (laughter.)
The lightkeeper responded on Saturday 29th April and I print it verbatim with no comment, except to say 'Good on ya, Philip': - 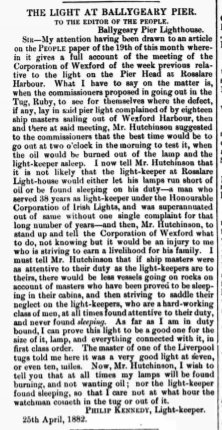 Posted by Peter Goulding at 3:01 AM No comments:

It is over five years now since I visited the Calf Rock, which would definitely be one of my Great Lighthouses of Ireland, if it were intact. Sadly it is only a stump, a terrible reminder of the power of the sea. 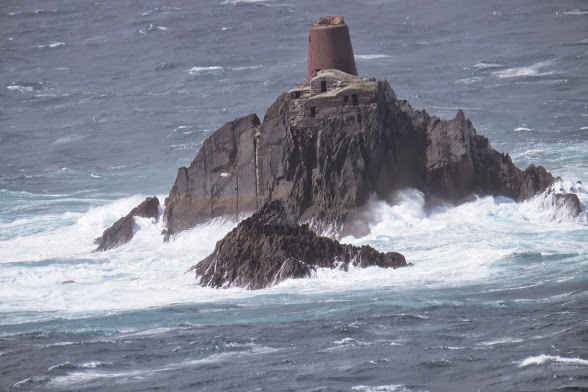 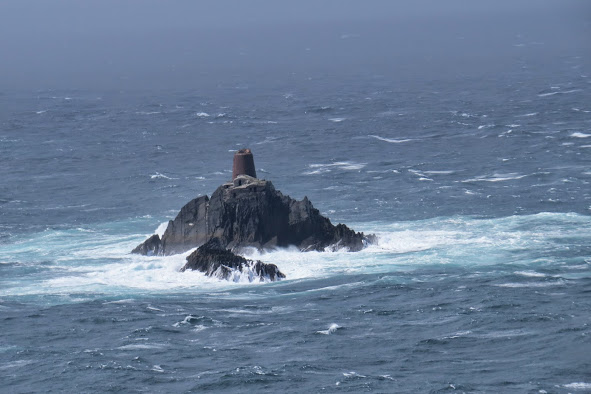 I  had cause recently to research an incident on the rock in 1869 when seven men were drowned and realised that I had no picture of this lighthouse. Not really surprising, seeing it was only in existence for fifteen years and in a very remote position too. However, I was able to find a couple of drawings, two from the pages of The Irish Builder and the third a sketch by Robert Callwell, a commissioner of Irish Lights, without whom we would have no pictorial representation of several of our long, lost lighthouses. 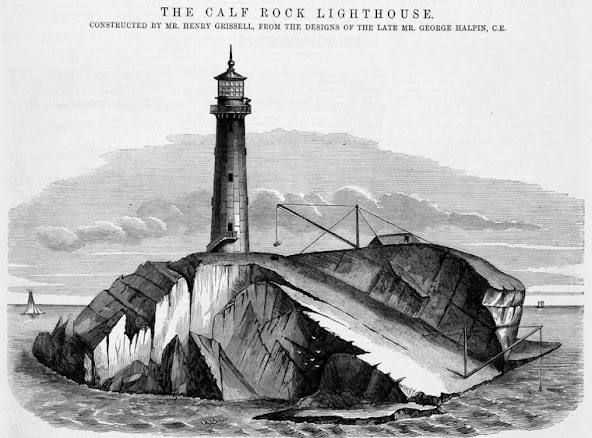 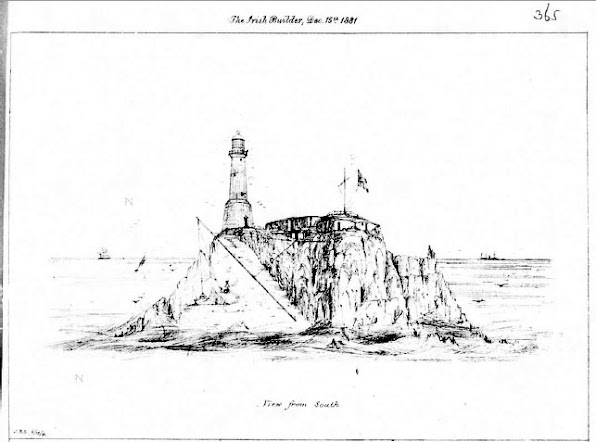 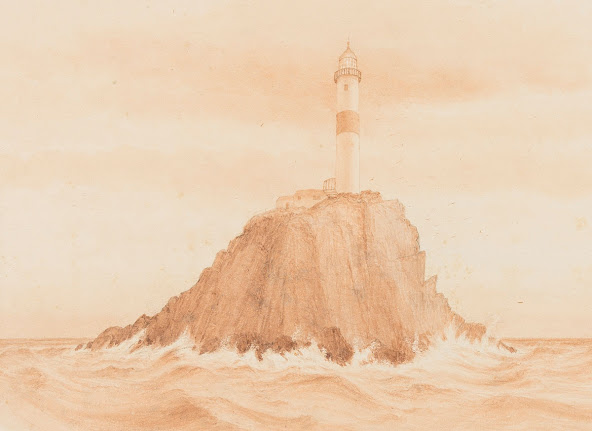