Daniel Kirwan and the Tower of Hook

Before he retired, lightkeeper Tux Tweedy, the last of his profession to serve at the famous Hook Head lighthouse, did a great deal of research into the history of that ancient edifice. Among other things, and with the help of CIL archivist, Frank Pelly, he compiled a list of keepers that served there, the earliest of which was a man called Daniel Kirwan, whom Tux dated to c.1810.
The Commissioner of Irish Lights has a comprehensive list of keepers dating from the early part of the twentieth century but the further back one goes in lighthouse history, the scarcer the names become. The names of keepers from the early part of the nineteenth century are rare indeed - I have only come across a handful  - and so Tux's list is extremely important in the annals of our maritime beacons. 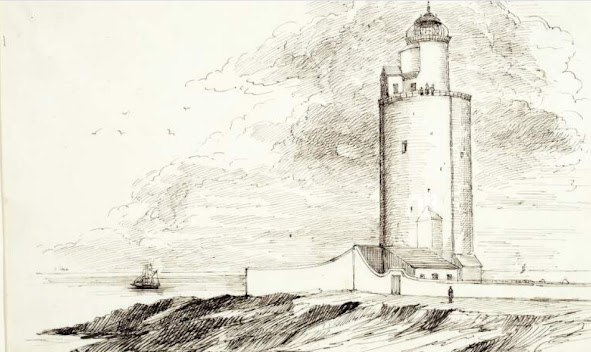 Hook Tower c.1830
I recently came across a two-part article entitled "A Visit to the Tower of Hook" in the Wexford Independent from the 8th and the 12th April 1865. It is a very engaging (and very long) piece in which the unnamed author, from Wexford town, pays a visit to Hook Head, and encounters two men, John Colfer ("the patriarch and oracle of the place") and Bat Fortune, who relate to him the stories of old from the peninsula. One of these concerns the aforementioned Daniel Kirwan (spelled 'Kerwan' by the author.)
Colfer tells the man that when the Ballast Board took over control of the lighthouses around our coasts (he gives the year as 1781 but it was in fact 1810, which fits in with Tux's date) the first keeper they appointed was Daniel Kerevan or Kerwan. He was a native of Kilkenny and "he became, in after years, celebrated over the province of Leinster as "Doctor Dan," from the number of cures affected by him with herbs, in the use of which he was much skilled. Kerwan filled the office of light-keeper for upwards of fifty years when, from his great age he was superannuated; and died about twenty years since, beloved and respected by the simple and kind-hearted people by whom he was surrounded."
This is quite interesting. Prior to the Ballast Board taking over the country's lighthouses, they were under the authority of the Revenue Commissioners and the general opinion seems to be that, because the keepers were paid a pittance, they supplemented their income in a host of other ways, smuggling, illicit alcohol production etc, while maintaining the light soon became a very poor second item of consideration. The keeper at the Hook was mentioned as 'brewing potions,' rather than tending his light.
The other thing is, if Daniel Kirwan died 'twenty years since', and was pensioned off prior to that, and served more than 50 years as a keeper, then the date of 1781could well mark his arrival at the Hook. When the Ballast Board took over, all the keepers had to receive new instruction - those that were unsuitable or unwilling to change were pensioned off while only those who received proper certification were allowed to stay on. Presumably Dan survived the Ballast Board putsch! 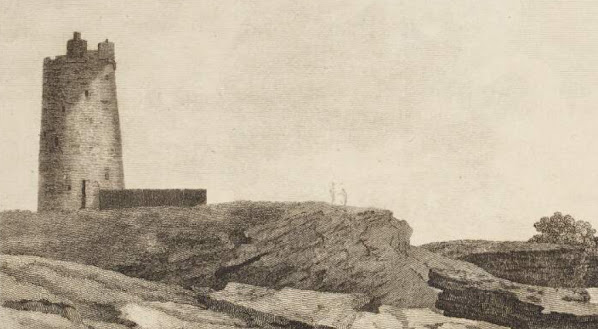 Hook Tower c. 1790
Dan Kirwan's stint as a lightkeeper is linked to that of a man called Tuthill or Tuttle. Colfer says that when Henry Loftus bought the peninsula from the Redmonds, which would have been around 1650, the first man he brought in to man the lighthouse was called Tuthill. Bat Fortune was a descendant of his but the only male descendant still alive was George Tuthill, who worked the Tower Farm, near the lighthouse. Bat tells the author that George's ancestors manned the light when it burned coal and wood and that George's father was born in the Tower. George lost a son near the lighthouse when he tried to drown a cat that had been killing his pigeons; the cat clawed his face and the boy fell into the sea and was drowned.
Bat Fortune makes one further reference to Daniel Kirwan in the piece. The small inlets, or 'chans', around the lighthouse all had names and one of them was called 'Dan's Chan.' When the author asked why, he was told "Old Dan, the lightkeeper, returning one night from Churchtown, where he had been to see some of his patients, for he was a wonderful man at curing almost every disease and all with herbs. But, as I said, he was returning to the Tower, when he met the 'people' (fairies) coming up from the direction of Bawley there beyond and they got around him and whirled him away so that he recalled no more till he found himself next morning asleep and as comfortable as if he was on a feather bed down in the 'chan,' so we call it 'Dan's Chan' ever since."
I'm delighted to read this because I had always imagined that waking up in a ditch in my youth was due to the copious amounts of alcohol I had poured down my throat during the evening. Whereas, it seems, it was down to the fairies.

The Tower of Hook with its three red stripes at the start of the 20th Century
Posted by Peter Goulding at 9:43 PM