I'm the sort of person who lives a holiday before they actually go on it. I like to prepare for the unforeseen. It all stems from driving five hours up to Lisbon from the Algarve one time, to do something different, and I'd done no research and the internet was only accessed from the pc, and we got to Lisbon and didn't know what to do or what the sights were. So we had our lunch in a bus station and drove back again, much to my wife and kids' disgust.
Ever since then, I have researched thoroughly my destinations, in case I miss something dead interesting and kick myself later. So, at the end of May, just prior to our annual walking break - this year it was based in Ballydehob in West Cork - I was looking at an Old Ordnance Survey map of the area (the Last Edition 1888 - 1913) and what should I come across, barely a half a mile from where we were staying? -

To be fair, not only had I never heard of a lighthouse in Ballydehob, I'd never even suspected that the very picturesque but sleepy West Cork town ever had one. If I had been surprised at coming across a long-lost lighthouse at Glandore, further along the coast, I was doubly so to find evidence of one at Ballydehob. I mean, Lighthouse Point! It had to be something. A lamp on a pole? A small lighthouse, like Glandore?
So, one evening, after a wonderful day exploring Knocknaphuca and the incredible Three Castle Head, I had about an hour to spare, so I decided to head off and try and find any trace of this lighthouse, which was in Greenmount, on the westerly side of the approach to the harbour itself. It seemed as if the way to get to it was to take Walter Young's farm track to its end and then somehow make my way down the coast, terrain unknown. I'd crossed the road to see Walter earlier on in the day - he owned the house we stayed in - but he had been out.
Walter came out when he saw me passing and I explained my quest, not thinking for a moment that he had ever heard of this long-demolished lighthouse. To my surprise, he knew about it. His father, who had lived to a ripe old age and was apparently the go-to man for local historians, had brought him there once, when he (Walter) was a boy. There was precious little of it left then, so there may well be nothing left of it now, he said.
What sort of a lighthouse was it, I asked?
Ah, it wasn't a tower, or anything like that, he replied. It was just an ordinary house. The people living there used to leave a lighted candle in the window to mark the channel between the shore and the rocks (the Illaun Crubeen) That way, the fishing boats and other boats didn't have to wait until daybreak to access the harbour in Ballydehob.
The way to reach it, he said, was probably at low tide. Follow the farm track to its end, then get to the shore and make your way along the shore. The land down there passes from his to his neighbours but he didn't think there was any access any other way, except by boat.
I thanked him and continued down the farm track. Unfortunately, the terrain near the coast was not the greatest. Three weeks of rain had turned it into a marshy and treacherous swamp. I had no idea if the tide was in or out but there was plenty of water. Solid ground was at a premium and I kept on sinking over my boots into squelchy muddy water.
After around forty minutes of trying to get down the coast, I came up against a built-up dyke, surmounted with hawthorn hedges both planted and chopped down. I reckon this was the boundary between the two farms.. There was absolutely no way through it and no way around it either. And so, I gave up and went back the way I came.
So, the investigations continue. Finola and Robert, the creators of the wonderful Roaringwater Journal have said they will keep an ear out for me. I, meanwhile, am seriously considering investing in a kayak like Dan McCarthy in the Irish Examiner.
Addendum - I am indebted to Tom Vaughan of Oakwood Aerial Photography down in Ballydehob for the following two photographs showing Lighthouse Point from the air. Is it only wishful thinking or can I really see three white blocks down there? 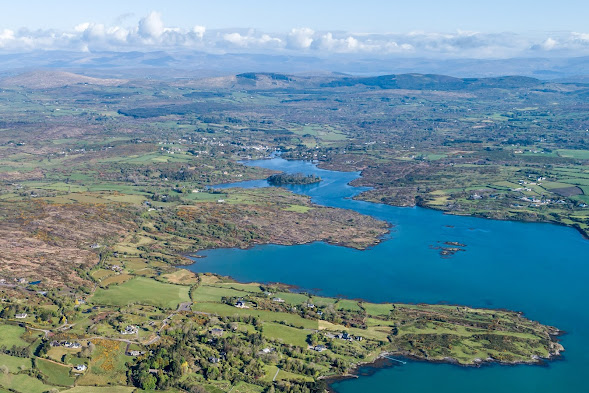 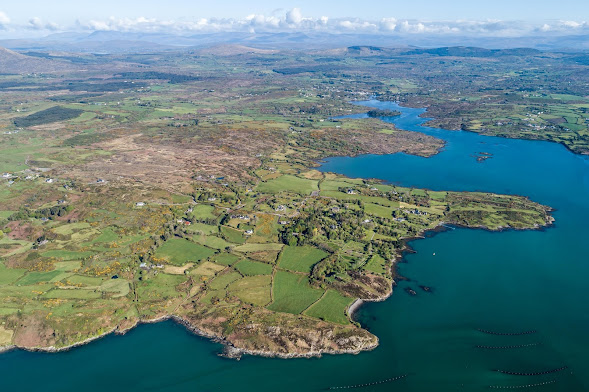 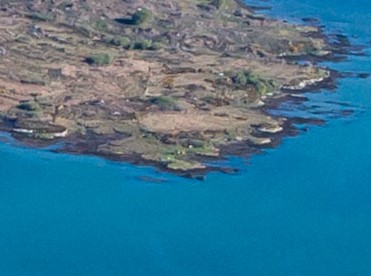 Posted by Peter Goulding at 2:31 AM