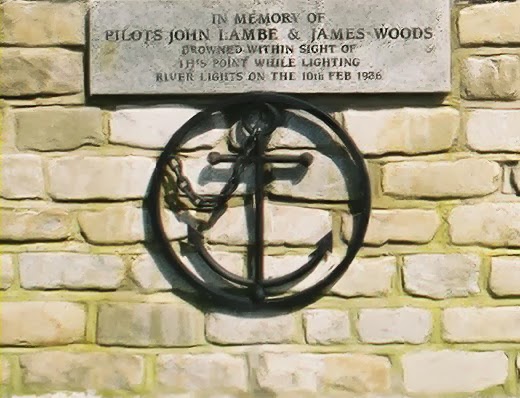 Again I am indebted to Barry Pickup for drawing my attention to this tragedy. Barry, who spent his early years in Blackrock co. Louth, is also responsible for the photograph above, situated, in Barry's own words, "at Soldiers' Point (Dundalk) with the Cooley Peninsula and Bellurgan in the background -  a very scenic location, which is more than can be said for the eastern side of the ship channel."
Normally, when we think of lighthouse tragedies, we normally think of the construction workers working under difficult conditions or lighthouse keepers and assistants succumbing to the wrath of the elements. This double tragedy, which happened back in 1936, falls into neither category but harks back to a time when the lights in Dundalk Bay - and the Foyle, the Boyne etc - had to be manually lit every evening. In my innocence, I had always thought this was the job of the lighthouse keeper.
The following story, which appeared in the Argus on the 70th anniversary of the sad events, I have lifted verbatim from that venerable newspaper.


Friday marks the 70th anniversary of the death of two Dundalk men who were drowned as they went about their job of lighting the lamps which guided ships into Dundalk Harbour.The two men, James Woods, aged 40 and John Lambe, aged 42, both from Quay Street, lost their lives after going out in a gale force wind on February 10th, 1936.Sarah Murphy, the great granddaughter of James Woods, says that the tragedy is still remembered by families in the Quay area.

“A monument was erected in their memory at Soldier’s Point on the 60th anniversary of their deaths,” she says, adding that it was greatly appreciated by the families of the two men.
At the time of the tragedy, the men were described as martyrs who had risked their lives to prevent ships from being wreaked as they made their way into Dundalk Harbour.
Sarah Murphy from Ashbrook, a great granddaughter of James Woods, has carried out research into the tragedy which claimed the lives of the two men.
“I decided to find out as much as I could about it and to put it into a book for my grandfather’s 80th birthday, two years ago,” she says.
Her grandfather Jimmy had to leave school and go out to work in order to support the family after his father was drowned.
“The story is part of my family history and also a part of the history of Dundalk Quay,” she says. “This story has been told to every child around the Quay for the last seventy years and will go on for many more.”
Referring to contemporaneous newspaper accounts of the tragedy and documents from the Harbour office, Sarah has pieced together events which led to the men’s untimely demise.
Both men were pilots but were also contracted to the Harbour Commission to light the lamps marking the five miles of channel leading into Dundalk harbour.
This entailed going out in a boat to light the twelve oil lamps.
“This was something that they had done every evening, but this evening was different from the rest” says Sarah. “The weather had been bad and there was something brewing up in the sky.”
There was a strong East-South-East gale blowing as they set out around 3.50pm and would normally have returned by 7pm. The Harbour Master Captain Higgins ordered a search to begin when they hadn’t appeared by 11pm, and volunteers from the Quay area joined Gardai from Bridge Street Station.
The search went on for hours through some of the worst weather ever seen in the town, with it being reported at the time that the searchers were up to their waists in water.
In the morning the men’s boat was found about two miles to the west of Soldiers Point. While the mast was in it, the oars, rudder, anchor and tiller were missing.
The men continued the desperate search for the lamp lighters and found that they had managed to light several of the beacons before their boat was swamped by the waves.
Their bodies were found within 200 yards of each other near the flood gates at Soldier’s Point, about a mile and a half from the Quay.
It was said that the watch that was found on my great-grandfather had stopped at 5.15 and that this was the time that the tragedy had happened,” says Sarah.
The funerals of the men at St. Patrick’s Cathedral were described “as the occasion of a demonstration of public sympathy such as Dundalk as rarely, if ever, witnessed, Practically the whole of the townspeople joined in the procession or stood in silent sympathy as it passed.”
The cortege was headed by some three hundred riverside workers, followed by the Harbour Commissioners and clergy.
Both men left widows and young children behind them.
Sarah’s great-grandfather was survived by his mother Annie, his wife Daisy and six children, Mary,14 years, who died shortly afterwards, Jimmy, 12, Kathleen, 9, Joan 8, Angela 6, and baby Christy.
John Lambe was survived by his wife and nine children, Peter 16 years, Kitty, 17, Peggy 13, Mary, 11, Shelia, 9, Geraldine 8, John 5, Bridget, 3 and baby Rose.
Tributes to the two men were paid by members of the Harbour Commissioners who held a special meeting to extend sympathy to their families.
It was stated at that meeting that there had been some discussion in harbour office on the Monday of the storm as to whether they should go out to lights or not, and the opinion had been expressed that perhaps it would not be necessary due to the extraordinary severe gale blowing. However, the two men had said that it was their duty and they were going to do it in all risks as they were concerned about the safety of vessels going into the harbour.
It was stated at the inquest that, both being strong fit men who were good swimmers, there was the possibility that one of the men might have saved himself if he had abandoned the other, but that anyone knowing one or other of them knew that while there was a breath of life left they would not abandon a colleague.
A fund was set up in the town to help the widows and orphans of the two men.
“It was a very sad story,” says Sarah, who discovered during her research that it was one of many drowning tragedies which marks Dundalk’s sea-faring history.
Posted by Peter Goulding at 6:19 PM No comments: 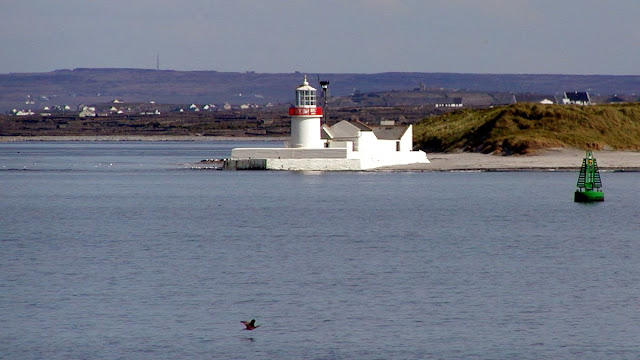 One of the many lights I have yet to photograph, Straw Island is located at the southerly end of Inish Mor, the largest of the Aran Islands. I'm sure I must have passed this light many years ago on the boat from Rossaveal in the days before my interest in these edifices was whetted, in the days when you were very careful what you photographed because so many of them didn't come out!
Anyhow, this one is still on my To Do list. The reason I mention it is that it recently fell victim, albeit temporarily, to the heavy winds that ravaged Ireland at the end of the month. CIL has a good piece on it at http://www.cil.ie/who-we-are/news/straw-island-storm-damage.aspx.
The thing that I found fascinating was the fact that the alarm raised on the far side of the British Isles in Harwich!

Posted by Peter Goulding at 3:03 PM No comments: 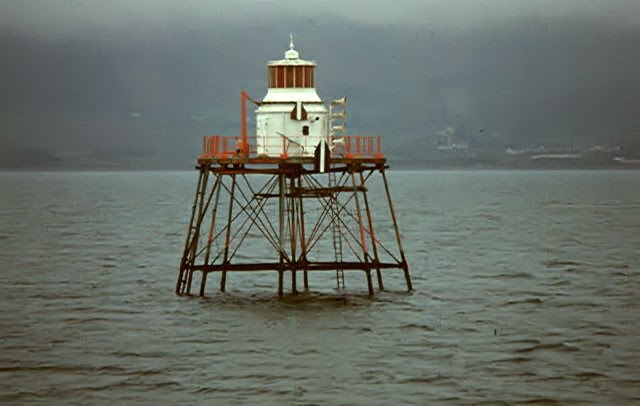 I took the attached picture of it from aboard the SS Waverley paddle steamer many years ago ( I forget the date!) which operated Dublin North Wall - Dundalk Harbour & return."
Built in 1855 by the blind Belfast engineer Alexander Mitchell, screwpile lighthouses were specifically designed to be built in sandy, silty areas where there was no foundation for a conventional light.
Further information on the light may be found here.
Thanks again Barry!
Posted by Peter Goulding at 1:48 PM 2 comments: