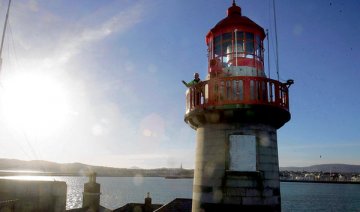 From the Irish Times January 12th.
THE LAST remaining foghorns around the 7,800km coastline have been switched off “officially” by the Commissioners of Irish Lights and several harbour boards.
However, should a blanket of cloud descend over Fastnet rock it may be that passing craft will still hear a ghostly warning sound from the fog signals for some time yet.
Fastnet is one of three lighthouses which will require a physical visit before the fog signal can be “disabled” – the others being at Old Head, Kinsale in Co Cork and Dundalk in Co Louth.
The Commissioners of Irish Lights confirmed yesterday that some of the signals may still be working beyond the “P45” date of January 11th, but most just required a “touch of a computer mouse” at headquarters in Dún Laoghaire, Co Dublin, to be silenced. The commissioner has been disabling fog signals at various lighthouses for the past 20 years and said it issued a marine notice about the remaining horns at nine lighthouses last September.
The Irish lighthouse authority, which depends on light dues from shipping, said that rapid advances in marine technology have rendered fog signals obsolete and they are not an “aid to navigation”.
Dún Laoghaire harbour board, which is responsible for the lighthouse there, decided to follow suit.
Irish Marine Federation chairman David O’Brien, who is editor of Afloat magazine, said that he believed there was still a case for using the signals.
“There are roughly 27,000 pleasure craft around our coast, according to a recent marine federation study. Fog can come in quickly and catch people unaware. Of course commercial shipping has back-up navigation systems but it is not always the case that lone windsurfers, pleasure craft or fishermen will have the same.”
Eddie English, owner of marine firm Sail Cork, said there was “no dialogue” about the decision, and he was aware of many small boats, some of them fishing craft, which would not be equipped with electronic aids.
“I delivered a boat from Crookhaven to Cork in thick fog in the days before chart plotters and GPS, and it was very comforting to hear the signal at Old Head of Kinsale and Roche’s Point, at the mouth of Cork harbour,” Mr English told The Irish Times.
He said he believed the Commissioners of Irish Lights had “compromised safety”, adding: “There is a compelling case for keeping these signals, at least in the ports or harbours where there are a number of small craft, along with recreational users such as windsurfers and kayakers.”

Though the old romantic me mourns the demise of the foghorns, I was in the village of Roche's Point at the entrance of Cork Harbour one time and I had no idea how the inhabitants lived with that racket!

Posted by Peter Goulding at 7:20 PM No comments: