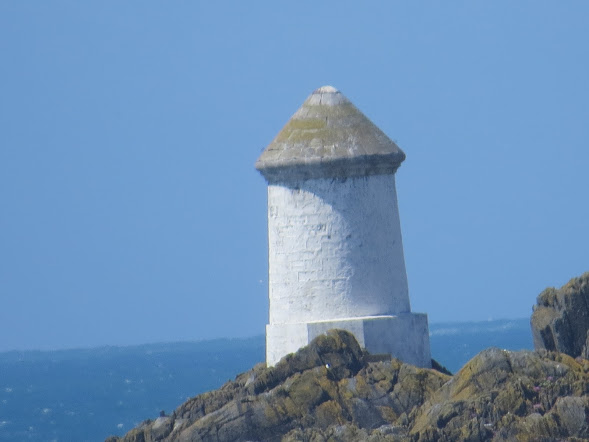 Nine years since I passed this little phallic beauty on a murky evening on my way to the Fastnet, I viewed it again from the western end of Long Island on a gloriously bright morning in late May. No, it isn't a lighthouse but oh, there were many calls for it to be lit back in the day, led by the Skibbereen Eagle and the Cork Constitution.
Due to the incredible amount of shipwrecks in Roaringwater Bay due to the too-high placement of the 1818 light on Cape Clear, the Ballast Board finally got off their collective arses and decided to do something about it. What they did was to place a light, not on the Alderman Rocks at the entrance of Crookhaven Harbour, but on the north side of the harbour on Rock Island, where it neither lit the Alderman Rocks, nor could be seen by transatlantic vessels heading east or west. At least, according to the papers, who were scathing in their criticism of the siting of the light.
So vitriolic was the criticism, that it only took the Board a mere 14 years to try and remedy the situation. JS Sloane, Chief Engineer with the Ballast Board, George Halpin jnr, Robert Callwell and a host of bigwigs surveyed the area and agreed to place beacons on Lesser Goat Island and the eastern end of Long Island.
The Cork Constitution wasn't impressed. Aside from calling for an iron lighthouse on Goat Island, they contended that "a beacon on Goat Island will be of no service, as it so happens that most people can see an island in the daytime but at night, when a guide to the entrance of a harbour is required, there should be a light which everybody could see, and not a beacon which nobody could see."
Probably due to the extreme difficulty of landing on Goat Island, the Ballast Board pressed ahead, inviting contractors to tender for the two beacons, despite the fact that one of them was un-land-on-able. Presumably, a beacon could be built and left, but a light would require twice daily tending. But the placing of the Alderman Rock beacon had the Skibbereen Eagle on the warpath. 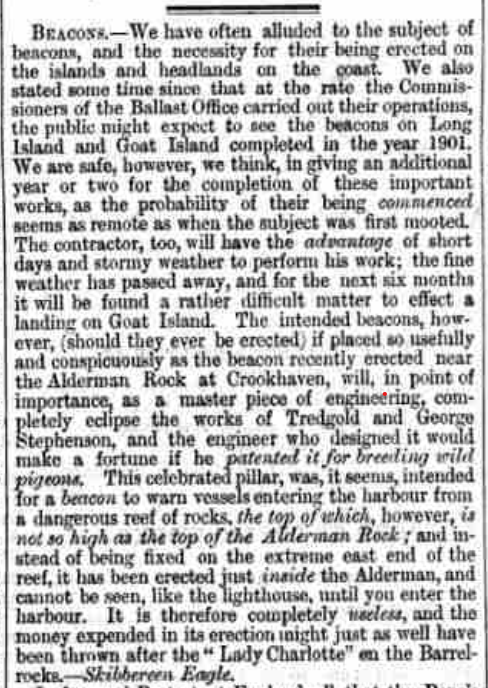 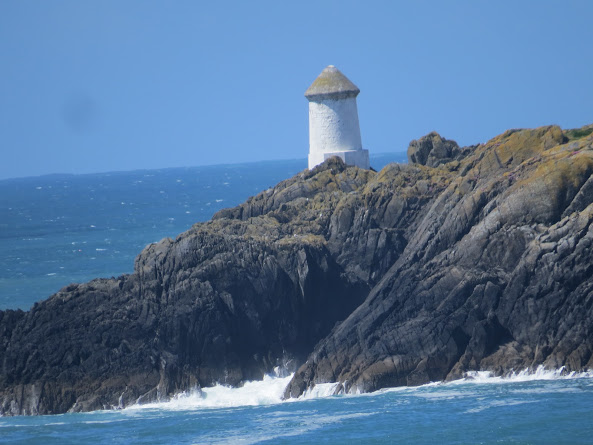 In May 1863, it was announced that local man Thomas H. Limrick Esq., had been selected to build the two outstanding beacons. Unfortunately, a lawsuit between the Ecclesiastical Commissioners and their tenants prevented him from using stones from a quarry just outside Schull to complete his task. The Eagle was in caustic mood: - 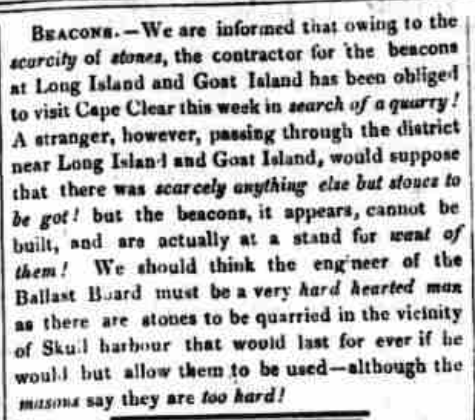 But by 1864, the two beacons had been erected, the one on Goat Island costing £428 18s 2d and the Copper Point (Long Island)  coming in at £237 16s 1d. The Goat was 15 feet tall and weighed some 250 tons. Presumably Cape Clear was correspondingly 250 tons lighter. The Skibbereen Eagle, let us say, was enamoured neither by the architecture nor its usefulness.
In 1961, the beacon was found to have shifted nine inches due to severe storms. 40 tons of gravel were used in its repair, as there were, presumably, no rocks left in West Cork. 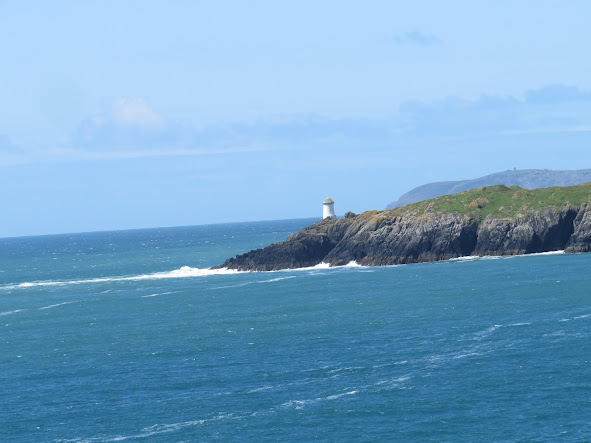 Posted by Peter Goulding at 9:05 PM