I was contacted recently by a very nice guy called Nick from Holywood, county Down. Nick makes beautiful short films recording the Ireland that he sees around him, from winter scenes to lakes and forests, skies, whatever captures his interest. He had become interested in lighthouses (there are a good few in his part of our coast!) and was wondering if I'd do a voice-over for a lighthouse film.
Now I'm a stammerer and was hesitant (pun intended) but Nick is the type of feller who can make a silk purse out of a sow's ear and he has made me sound almost fluent. I'm not sure the piece was supposed to be about me but that's how it's turned out.
Posted by Peter Goulding at 2:46 PM No comments:

Inis Mor lighthouse is up for sale. The original and long-defunct lighthouse at the highest point of the Aran Islands commands magnificent views over all sides of Galway Bay and boasts no mod cons.
I visited in 2018, on the bicentenary of its establishment, though I didn't realise it at the time. There was a handmade notice on the door saying that the lighthouse was closed for renovations, though there were no signs of any renovations happening. The tower itself seems fairly intact but the houses are pretty dilapidated.
In 1799, a signal tower was erected at the site, one of a chain that stretched around the coast, each one visible to two others, in case the French invaded. The lighthouse was established next to the tower in 1818 to mark the chain of Aran Islands in Galway Bay, a task at which it failed miserably. Like many lighthouses at the time, it was built too high and was frequently enveloped in low cloud or fog, rendering it useless. In 1857 it was replaced by two lights; one at the western end of the chain (Eeragh or Rock Island) and another at the eastern end (Inis Oirr). A third light at Straw Island was established in 1878. 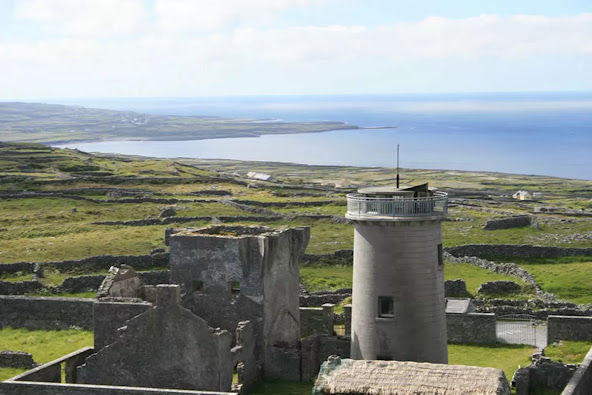 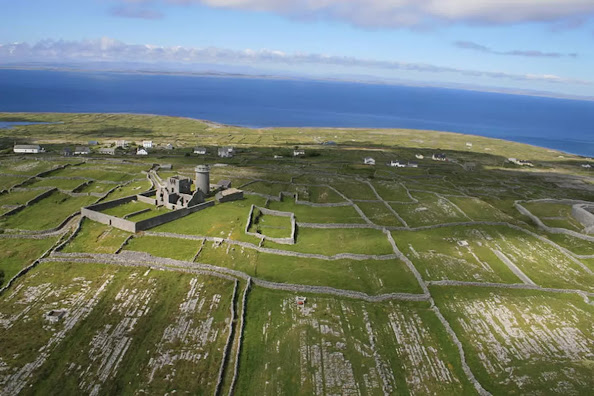 The lighthouse compound is for sale through Keane Mahony Smith estate agents for €550,000, which seems almost as steep as the track up to the site, considering that both the lighthouse and the adjacent signal tower are both protected structures and you wouldn't be able to turn them into a bijou two up, two down. The photos on this page are from the estate agents brochure.
Oh, and there's no WIFI.
Incidentally, the keepers cottages on Rathlin O'Beirne island off the coast of Donegal that were for sale in 2019 were snapped up for €75,000. 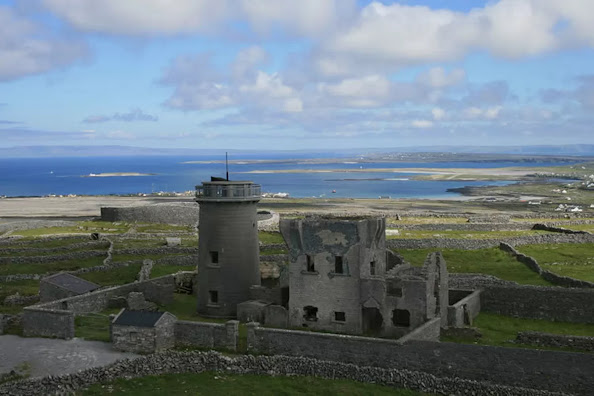 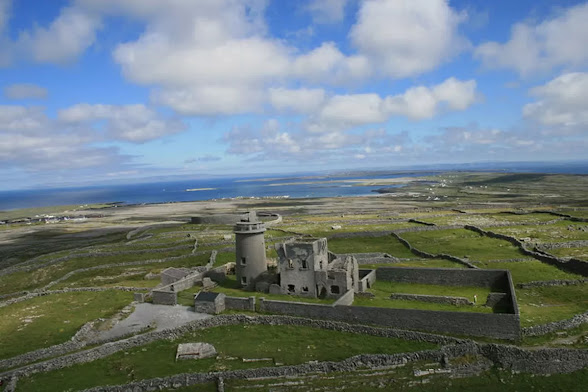 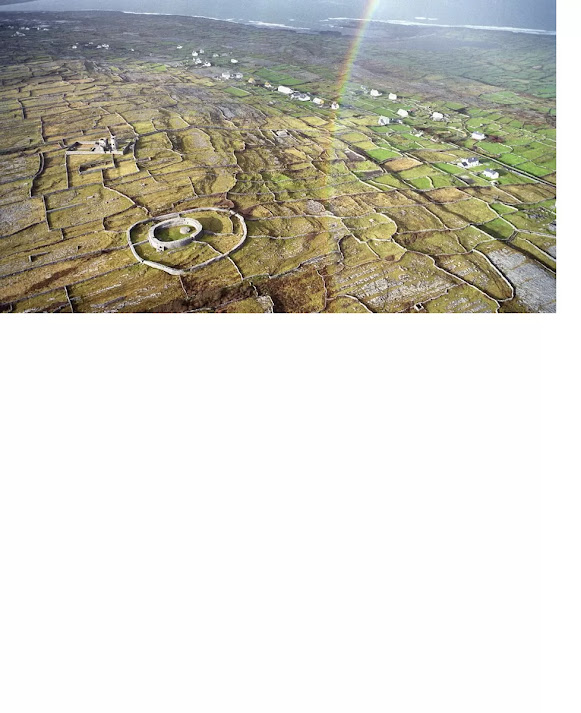 Posted by Peter Goulding at 2:22 PM No comments:

Everything you wanted to know about lighthouses... 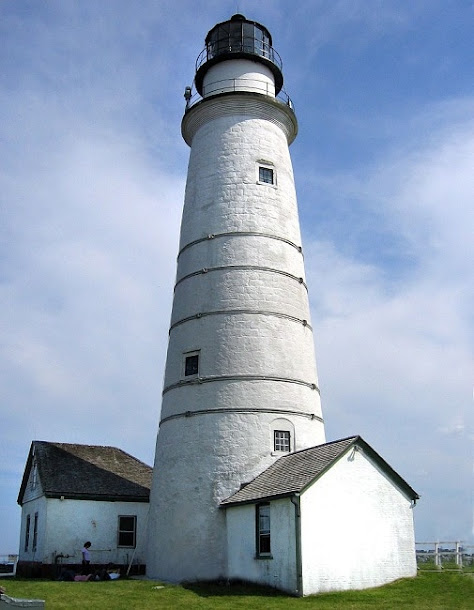 Okay, not quite everything but there is a LOT of information on lighthouses on this site.
My thanks to Alex from Maine for putting me onto it (and she certainly has some stunning lighthouses in that part of the world). It is a list of sources for lighthouse information and you could spend hours just browsing all the information on Fresnel lights and ancient lighthouses and lighthouse terminology. Naturally, being a U.S. site, the emphasis is on North American lights but there is plenty in there for the Irish lighthouse enthusiast too. I have put a link on the sidebar.
Of course, if it told you everything you needed to know about lighthouses, it would make this blog redundant!

Posted by Peter Goulding at 2:59 PM No comments:

Did you ever hear of a 'special mark' in relation to maritime navigation? Me neither. I've heard of a wreck buoy to mark a wreck; cardinal marks and lateral marks but this is a new one on me.
According to the CIL website Special Marks are used to indicate a special area or feature whose nature may be apparent from reference to a chart or other nautical publication. Special marks are yellow. They may carry a yellow 'X' top-mark, and any light used is also yellow.
My thanks again to Nick Blackburne from Holywood who spotted this one just off the shore from his home town, obviously marking the location of a gas line. I've no idea when they were introduced.

I'm presuming they are the maritime version of this: - 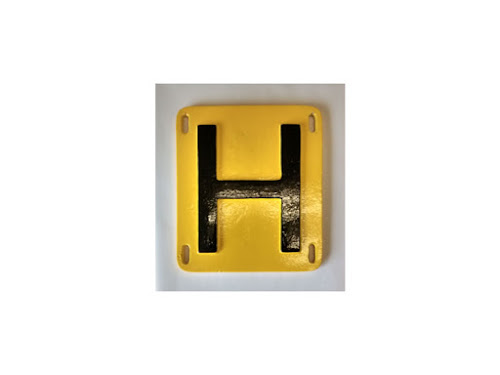 Posted by Peter Goulding at 6:14 AM No comments:

The fire at Donaghadee Lighthouse 1900

The video of Donaghadee lighthouse below was made by a very talented guy called Nick who does a lot of short maritime features. The channel is on YouTube and is called Irelandscapes.
N Ireland Donaghadee Lighthouse - Relaxing Landscape Scenery 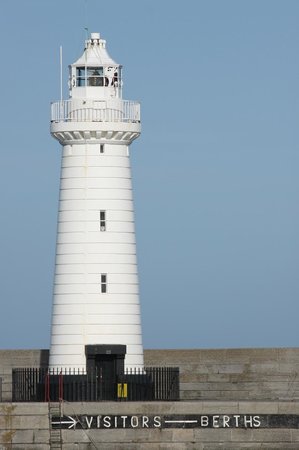 I have spent years omitting the second 'a' of Donaghadee and turning it into a three-syllable words instead of four, possibly due to the fact that I never heard anybody saying the name. I have no idea how it began but I am now very self-conscious of it and finally realise why there was so little on t'internet about this lighthouse in county Down - I'd been spelling it wrong on the search engines.
Donaghadee harbour is very old, dating back to the 1600s and for many years it flourished due to the sea route to Portpatrick in Scotland, a mere 22 miles. The major drawback of this route was lack of railway facilities at either port and ironically, the construction of these two railways coincided more or less with Larne - Stranraer replacing Donaghadee - Portpatrick as the preferred ferry route. 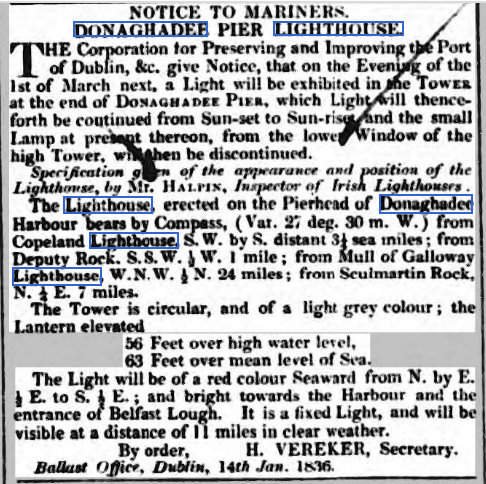 A new harbour designed by the celebrated engineer John Rennie was constructed in the 1820s. The lighthouse at the end of the pier was established in 1836, as per the Notice to Mariners above. It was unpainted and constructed of cut Anglesey limestone  - hence the light-grey colour - and in the 1860s acquired a black plinth. A nearby cottage for the use of the lightkeeper did not materialise until 1864, the Ballast Board renting a house in the town instead. 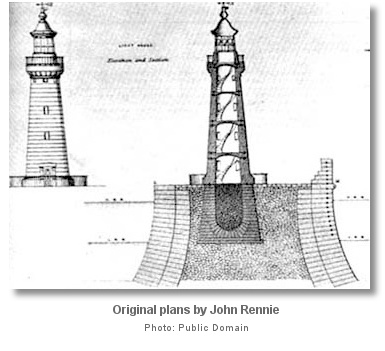 As can be seen from John Rennie's plans above, the tower contained four storeys, not including the lantern and from the very start the lighthouse featured those quite unique horizontal grooves, for which, I am sure, there is a more technical term.

A remarkable painting of Donaghadee Harbour from the 1830s when both it and the lighthouse were brand new. The bridge in the foreground was a temporary arrangement for workmen while the north pier was being built. Below, the slate-grey lighthouse detail from the above painting. Picture courtesy the Donaghadee Historical Society

At around 6am, one of the coastguards on duty noticed a flame suddenly flash up the dome of the lighthouse, followed by a loud noise. He went to fetch his commanding officer, Samuel Pearce, by which time the whole of the top floors were engulfed in flames and smoke. Pearce took two of his colleagues and ran to the lighthouse where they were joined by several coalworkers engaged on the pier. Unfortunately, the only fire-fighting apparatus they had were zinc buckets which were practically useless. The men dared not enter the building for fear of burning debris raining down on top of them and they had no means of getting above the fire to pour water down on top of it. 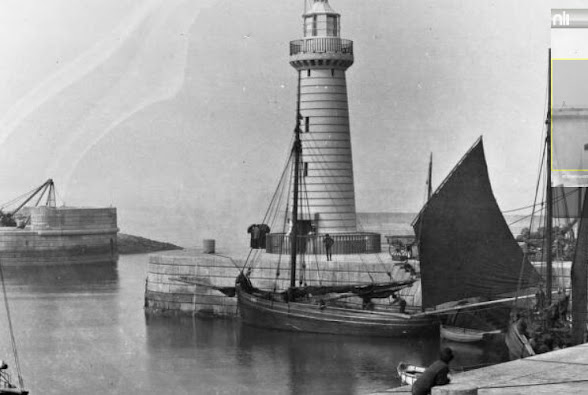 Given a free rein, and bolstered by the escape of oil from the tank used to supply the lamp, the fire raged gleefully. The landing below to the dome (which had been completely destroyed in the initial explosion) soon had all its interior wrecked. The fire then skipped down the stairs to the second landing and destroyed everything there bar the walls.
When the third landing was being ravaged, Mr. Pearce somehow managed to get up to the lantern and a chain of willing bucket passers meant that he could now attack the fire from above. In less than an hour from the lantern being reached, the fire was quenched, although it was well over four hours since the initial explosion, a salutary lesson to the people of Donaghadee that perhaps they needed to invest in a fire service.
That night, and for a few months afterwards, a ship's lantern  - reputably as bright as that of the lighthouse was used as a temporary replacement until the new lantern and light were ready to go in October.
Lightkeeper Matthew Healy remained in his post during the refurbishments until he was transferred away in early 1904. For a time, thereafter, the light was managed by the keepers on relief from Mew Island who lived ashore in Donaghadee.
A Mr. Kennedy, described as 'the lightkeeper at Donagahdee had a narrow escape when he lost control of his bike coming down New Street, shot over the Parade and crashed into the sea wall, over which he was propelled onto the sand fourteen feet below.
By 1911, Sligo man James Corish was the lightkeeper.
Donaghadee lighthouse was the first in the country to switch to the new-fangled electric light in October 1934, with the keeper being withdrawn at the same time.
Posted by Peter Goulding at 4:12 PM No comments: