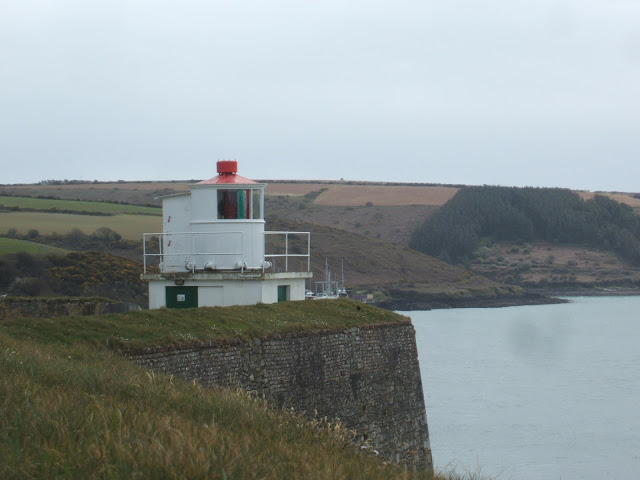 See post below for details of Charles Fort. To get there, head for Kinsale and then take either the very narrow and picturesque coastal road on the east side of the harbour or the uphill inland bland route. The fort is well signposted and is about 2kms away 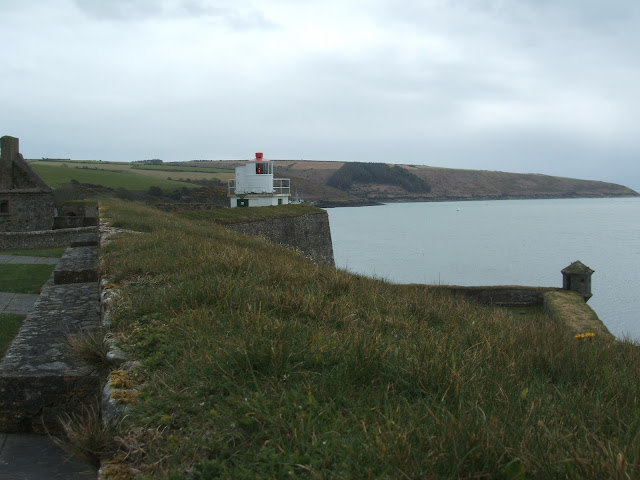 The light was only established here on 27th April 1929. It is a bit incongruous in among the ruins! Doubtless today they would build it in a stone tower to blend in with its surroundings. 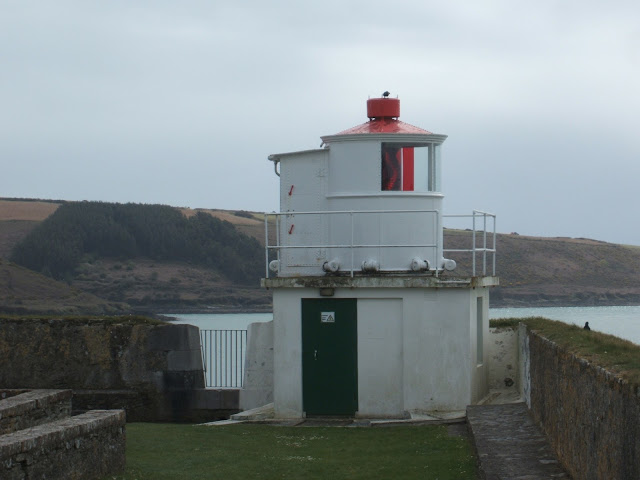 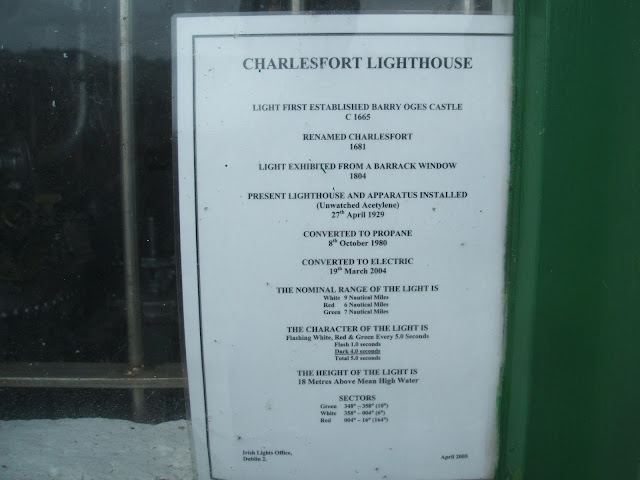 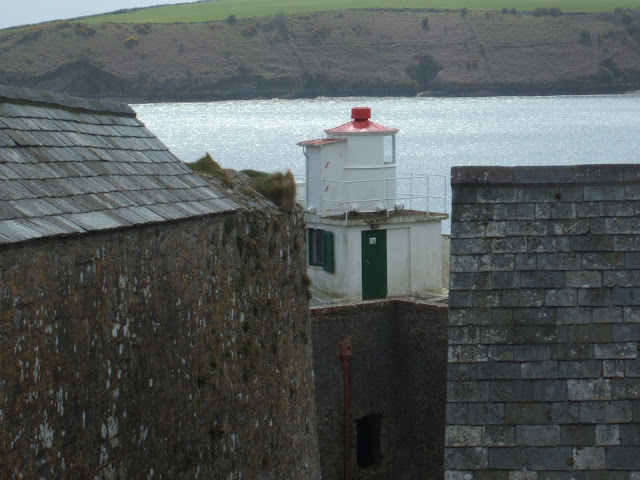 Posted by Peter Goulding at 3:22 PM No comments: 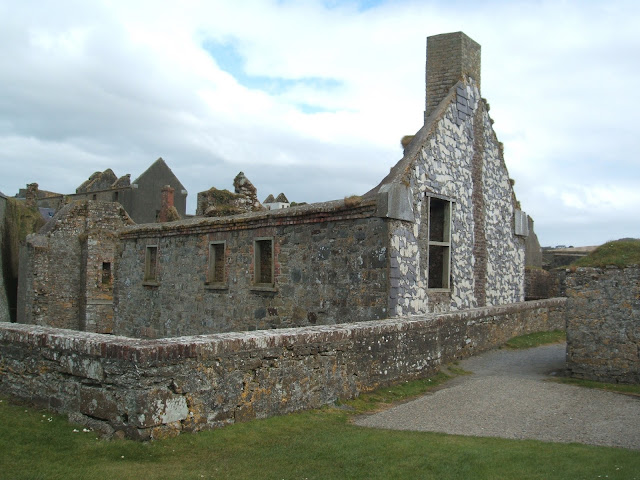 Kinsale was a very important town in Ireland in the 16th and 17th centuries, lying on the trade route between England Ireland and Spain. The approaches to the harbour are very narrow and Barry Oge's Castle was chosen to become one of Ireland's first six public lighthouses in 1665. This light was not so much to warn ships away from the shore but to illuminate the shore for the seafarers trying to find their way in and out of the harbour. 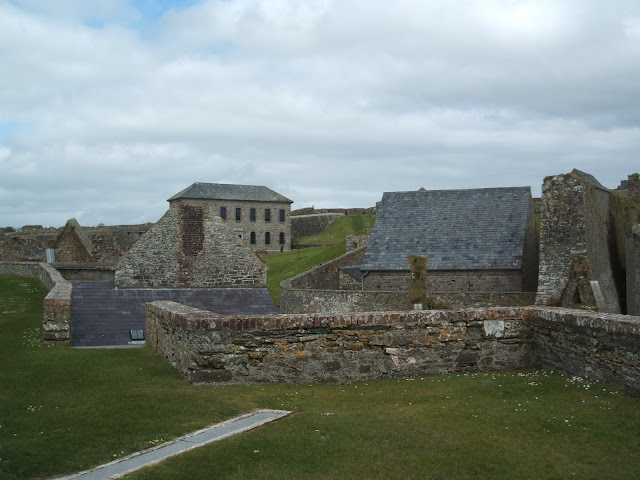 Because of the threat of attack by foreign foes at Kinsale, two forts were built on either side of the harbour approaches. Barry Oge's Castle had been razed to the ground by Crown forces intent on destroying the power of Gaelic chieftains and Charles Fort was built on the sight. A light was shone from there continually, but we don't know where from. However there is a reference in 1804 to a light being shone from the upstairs window of the married quarters. 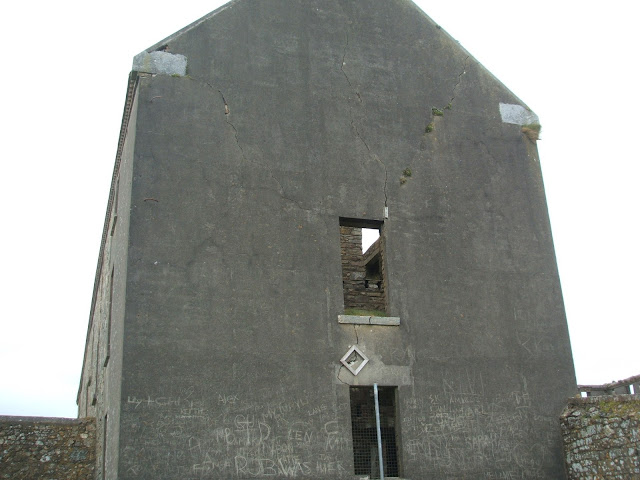 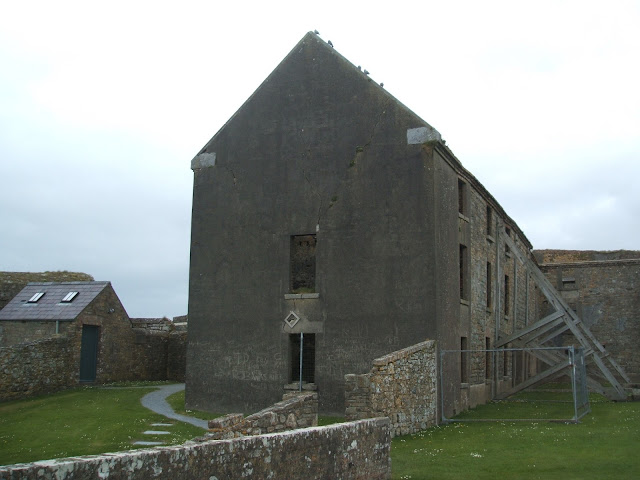 Posted by Peter Goulding at 3:15 PM No comments: 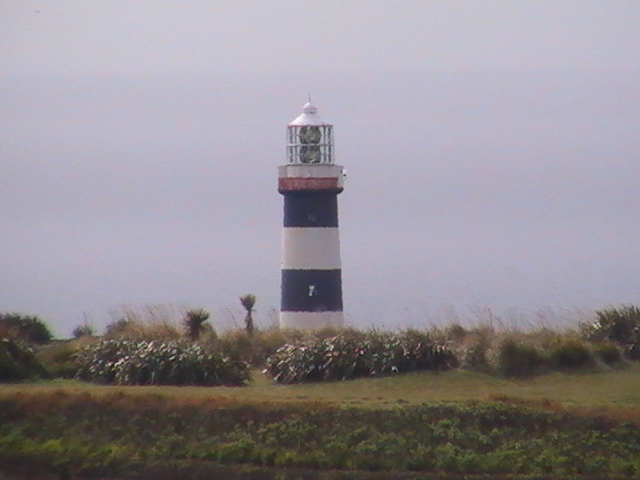 This is the third lighthouse erected on this site (see previous post) It was built in 1853 and the photos are a bit misleading as there is a further black band below the lower white one, together with a keeper's cottage. 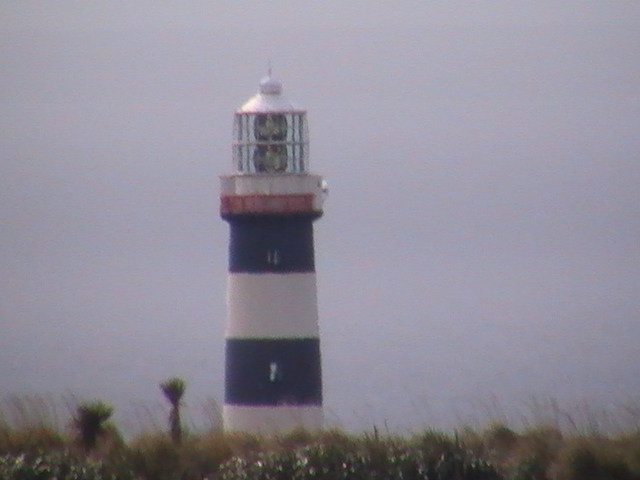 Why can't you see it? Well, the Old Head of Kinsale is a promontory, but it's practically an island as the piece joining the mainland is so slim. In the 1990s, much to the dismay of the local population, the entire Old Head was purchased by a rather expensive golf club, who immediately erected barbed wire and hired security to keep people out. 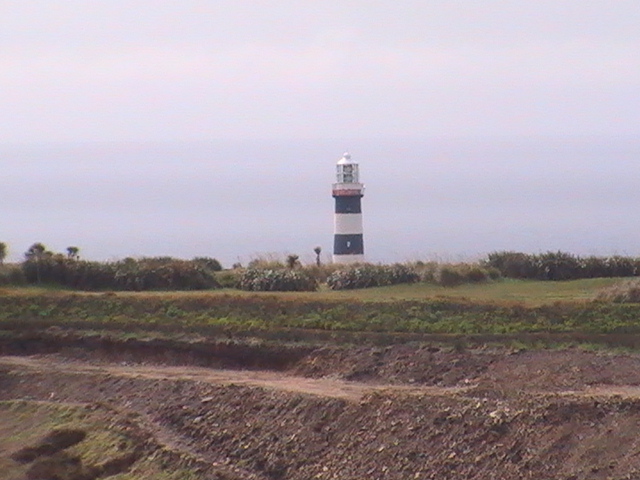 The local people were enraged and organised mass picnics where they would break through the security and picnic on the edge of the cliff by the lighthouse. People had been doing this for years here. In fact they had been doing just that on May 1st 1915 and watched stunned as the Lusitania was torpedoed off the coast with a terrible loss of life. 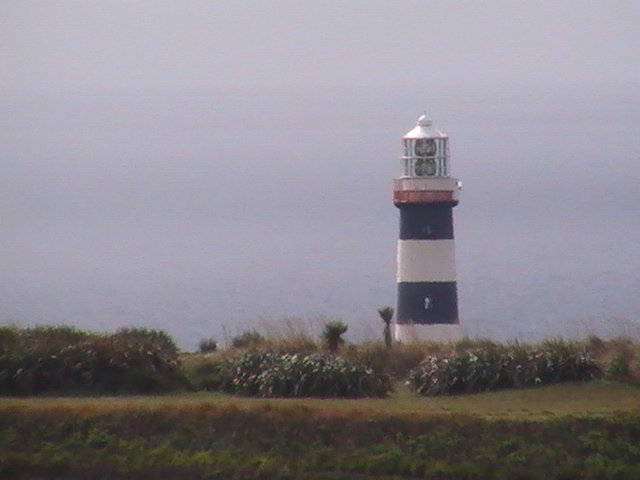 Anyway, corporate business won the day. The High Court upheld the right of the Golf Club to keep people out and now the public aren't allowed past the ruined watchtower below, unless they want to pay the exorbitant membership fee. The hill just before the watchtower affords the best views currently possible to plebs like myself but the head must slope seaward on the far side as you only can see three and a half bands of the tower. 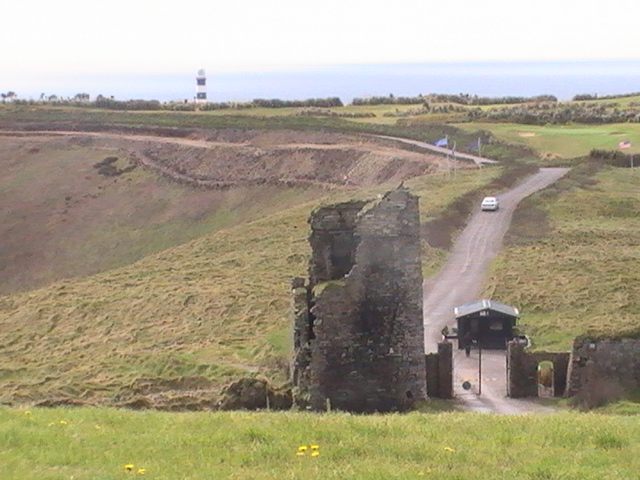 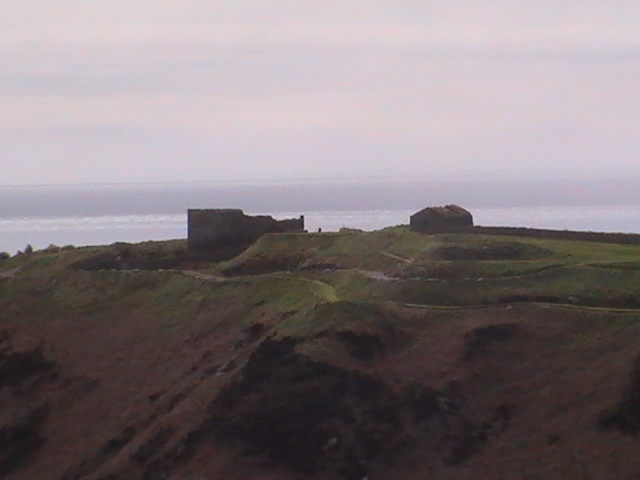 Okay, not the greatest photographs you ever saw but the reason for that is explained in the next post (Old Head of Kinsale 3) The Old Head of Kinsale is a promontory lying SSW of Cork City and about 4 miles south of the town of Kinsale. To get there, drive to Kinsale, cross the bridge and head for the village of Old Head. On the other side of Old Head you will get the views seen above and below.
The Old Head of Kinsale was one of the six original lighthouses patented to Sir Robert Reading in 1665 (the others were at Hook Head, Barry Oge's Castle, Howth land, Howth sandbar and Islandmagee) The light consisted of a a coal brazier located on the roof of a cottage. The cottage can be seen on the right of the pictures. The brazier was replaced by an oil light in 1804 and then a 42 foot stone tower supplanted it in 1814. However when the modern lighthouse was erected in 1853, the stone tower was lopped to avoid confusion, leaving only the stump (on the left hand side of the picture) 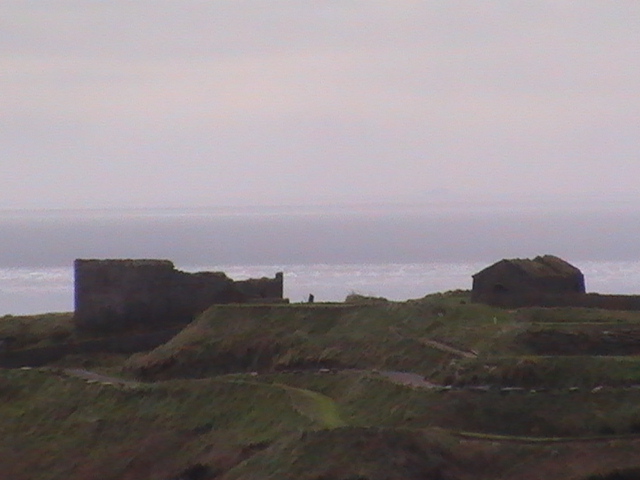 Posted by Peter Goulding at 2:46 PM No comments: 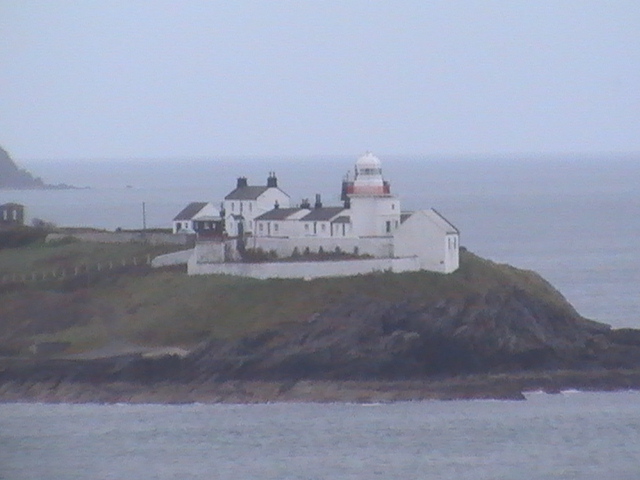 Okay, not quite re-visited but another perspective to the light the last time I was here The original lighthouse  at this site was dismantled stone by stone and rebuilt at Duncannon. The present lighthouse dates from 1835. 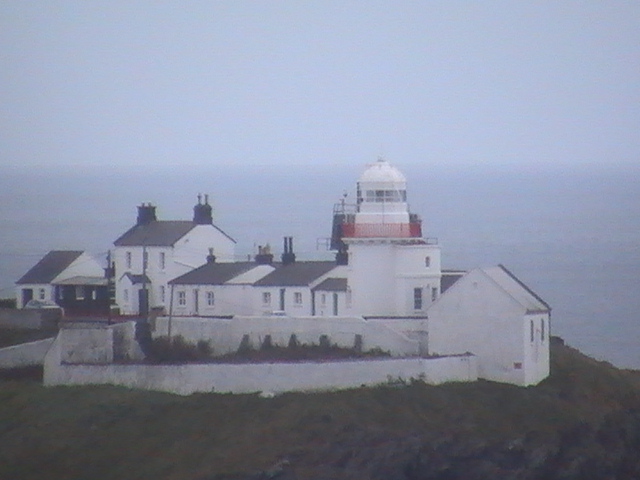 Roche's Point is one of Ireland's most famous lighthouses, featuring a lot on shipping forecasts. It is situated on a promontory on the east side of the entrance to Cork Harbour. These are views from near Crosshaven on the western end of the promontory. To get to this point, drive to Crosshaven and at the roundabout in the village centre, take the road that passes the big stone house with the blue door (you can't miss it!) 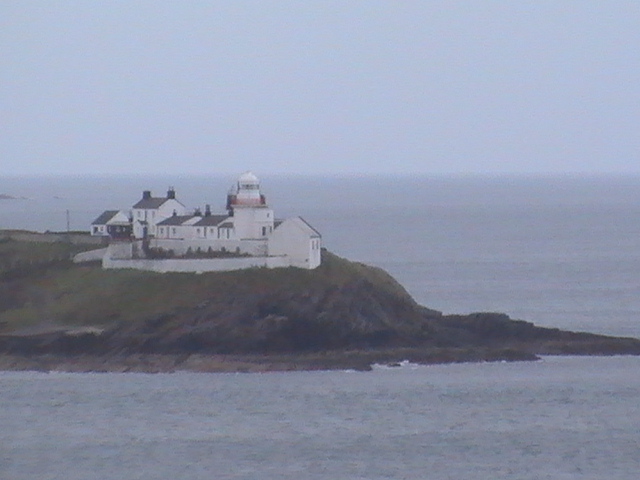 When I was at the lighthouse last, it was very foggy and the Roche's Point fog signal was booming out long and fast. Apparently the fog signal has now been silenced and local residents can get a bit of sleep on foggy nights. 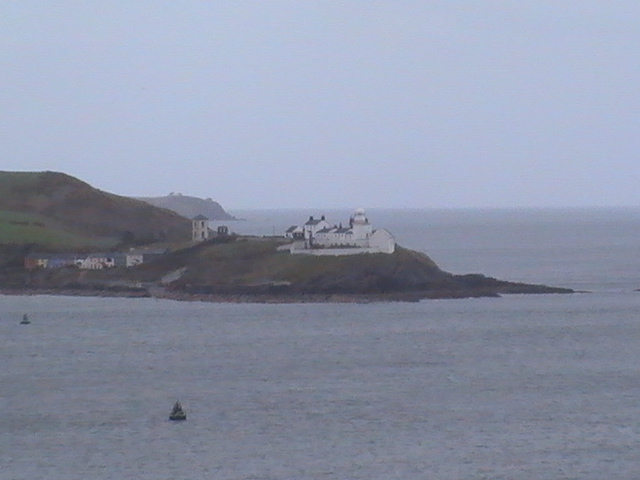 Posted by Peter Goulding at 2:33 PM No comments: