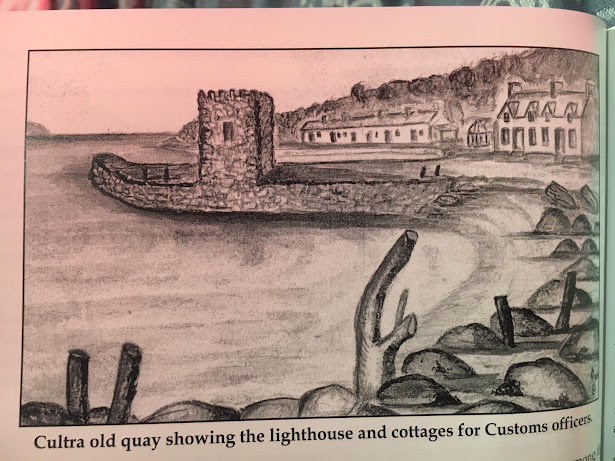 When I first came across the lighthouse at Cultra, next to Holywood in county Down, I had absolutely  no information on it at all. It was marked on an OS 1st edition map (1834) as being located on the quay at Cultra Harbour and on the 1854 2nd edition as being 'in ruins' but t'internet was strangely non-forthcoming on any description of this mysterious edifice.
Once again, I am indebted to my equally mysterious friend, Nick from Holywood, for pointing me in the direction of a remarkable book called "Holywood county Down, Then and Now" by the Rev. McConnell Auld M.A., known to all and sundry as 'Con Auld,' whose list of achievements would fill a book on its own. The book is A4 size, landscape and includes practically everything there is to know about the small town on Belfast Lough.
Cultra - the back of the beach - was owned by the Kennedy family since 1671 and was part of a large tract of the North Down coast acquired by that family. It is possible that its harbour was the factor that encouraged them to build Cultra House at this spot. Belfast Lough was notoriously shallow due to sand on its southern shore. At Cultra was the only harbour that permitted deep water vessels to put in. In fact Cultra was, in 1775, one of only two places where the cross-channel packets would use to take on and disgorge passengers.
According to Con Auld, the Hugh Kennedy rebuilt the harbour in 1818, adding a small square light house building in the centre of the rather odd arrow-shaped quay. The harbour could facilitate vessels up to three hundred tons. A ferry boat The Bangor Castle left Donegall Quay in Belfast for Bangor every afternoon and included Cultra on its journey. Regattas were held here too and papers were filled with reports of the day's racing.
However, the development of Holywood and its incredibly long pier as a port, coupled with the dredging of Belfast harbour meant that by 1850, Cultra harbour had outlived its usefelness and was now 'going to run' according to one Dr. Kelly. By the 1870s it was completely dilapidated.
Intriguingly, Con Auld includes a sketch of the quay and lighthouse in his book (top picture) but it is unclear if this sprang from his imagination or if he copied it from another source. (Another sketch of his of the first Holywood Bank lighthouse looks remarkably accurate, so I am inclined to believe the latter. He lists his sources at the back of the book but it would take me a lifetime to go through them all and find the relevant illustration)
Sadly Con Auld died a couple of years ago, leaving to the people of Holywood this remarkable legacy, an example to all local historians of what can be achieved through research and collating. 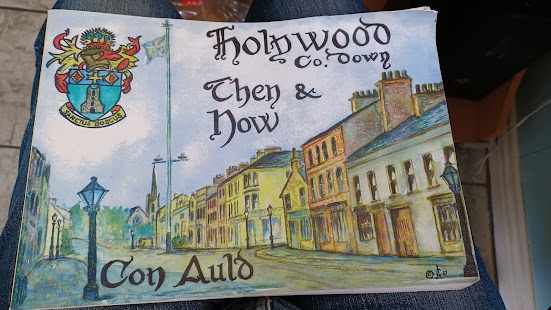 Posted by Peter Goulding at 3:17 AM