The death of William Duff, the Kish lightship 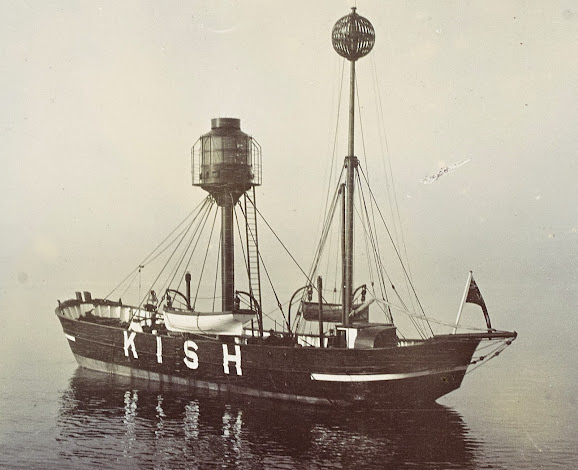 The Kish lightship in the first decade of the twentieth century. To me this looks like the Cormorant but, hard to believe, I have been wrong in the past. Lightships were painted black until the 1950s, when red got the contract.

Back to 1902, the lightship on the Kish Bank, just outside the entrance to Dublin harbour, gained headlines worldwide when, on 8th September of that year, she was sunk by the Royal Mail Steamer Leinster in dense fog. Neither party saw the other until a collision was unavoidable and the lightship – The Albatross – was practically split in two by the force of the collision.

The seven men aboard the stricken lightship – William Daly (Master), seamen William Duff, Patrick Langan, Michael Crowe, George Warren and Joseph Pluck and the carpenter, John Day – had been on board about a week and calmly and quickly lowered the lifeboat and rowed away. They were picked up by the Leinster and brought to Kingstown (Dun Laoghaire), seemingly none the worse for their experience. The lightship sank within minutes. It was eventually salvaged and sold off.

One of the rescued men was William Duff. He lived in 4, Northumberland Place, Kingstown and his main role on board he lightship – now the Shearwater, as the Albatross was otherwise engaged in submarine activities – was as a lamp trimmer. He had been on the Kish for twenty  of his fifty years.

The Shearwater was a relatively new addition to the fleet having been built in 1894 at a cost of £3,900.

According to his wife, Margaret, William’s nerves had got the better of him since the contretemps with the Leinster. He had told her that he never would get the better of the shock, although on Sunday morning 12th October, he seemed to be in perfect health as he left Kingstown to rejoin the lightship. He and the rest of his shift had actually been due to relieve the other crew on the Saturday but the weather had been too bad.

His shipmate, Michael Crowe, who had also been on the Albatross agreed that William appeared to be in very good health on that Sunday and certainly made no reference to anything ailing him. The two men were winding up the weights of the revolving light at around 9.45pm when suddenly William cried out and fell down dead. Michael called the officer in charge and the two of them attempted resuscitation, to no avail. The body was subsequently brought ashore and taken to St. Michael’s Hospital, Kingstown.

A post mortem examination found that the deceased had an enormous enlargement of the liver coupled with ‘a flabby heart.’ Liver disease was entered as the cause of death. It was an unremarkable death, now long-forgotten, for an unremarkable seaman who had given his life to the lightships.

As for the R.M.S. Leinster, she continued to ply her trade between Holyhead and Kingstown until a few short weeks before the Armistice in 1918, when she was sunk by two torpedoes from a German U-boat. There was no passenger list but, thanks to the efforts of Philip Lecane, we know that there were 567 named people killed, making it by far Ireland’s worst maritime disaster.

The tragedy happened as the Leinster was passing the Kish lightship.

Posted by Peter Goulding at 3:59 AM