Another lost lighthouse and this time I can find nothing out about it at all. This is simply a tale of two Ordnance Survey maps, the first edition from 1834 and the second edition from 1858. Basically, the lighthouse is there in 1834 and in ruins in 1858. It also seems that Kennedy's Quay has disappeared by that time 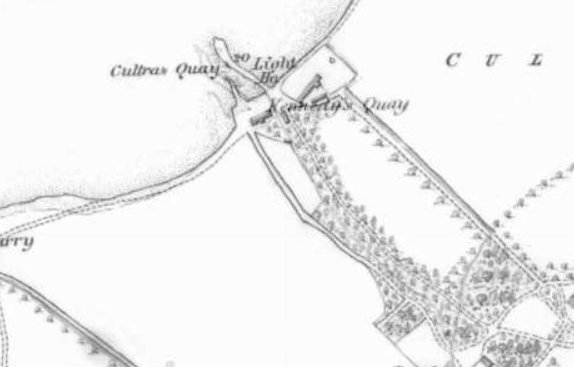 OS 2nd edition 1858
The whole area was private land owned by the Kennedy family. They used to open up the demesne on Regatta Day to the general public, though probably not the plebs. However in the 1840s, they started parcelling off parts of the land, particularly along the foreshore and this might have something to do with the disappearance of Kennedy's Quay and the ruination of the mystery lighthouse.
Another occupant of "Cultra Quay" (I'm sure he didn't doss on the quay himself) was one Robert Pattenson who was secretary of the newly-formed Railway Board and also a bigwig on the Belfast Harbour Board.
Any further information gratefully received!!!
Posted by Peter Goulding at 4:03 PM