Fanad lighthouse June 1906 - on some of the lighthouse tours of inspection at the start of the twentieth century, Sir Robert Ball brought along a panorama camera to record the experiences. The results are in a series of CIL Panorama Albums, now in the National Library. This photo is from Panorama Album D.
A lot of the records at the Military Archives have now come online and have shed a lot of light on the period from the Easter Rising to independence. Of particular value are the witness statements, made many years afterwards, which not only shed light on the military shenanigans but are also crucial to understanding the philosophy of the times, the social world and the architecture of the early 1920s Ireland.
I recently came across a witness statement by one Joseph P. McGinley, who served in the Volunteers and later became a TD in the 2nd Dail. He recounted his times with the No. 1 Brigade, 1st Northern Division, and I here reproduce his account of a raid in Fanad.

At the end of August 1920, the late Neil Blayney told me that he had information that Fanad Head coastguard station was about to be evacuated. We had been discussing the possibilities of attacking this post at an earlier date. If the rumour about its evacuation was true, it was necessary to carry out the attack immediately.
I suggested that the best means of obtaining information was, Neil Blayney being an insurance agent, to go up there, get in touch with some of the garrison under the pretext of selling insurance, and he would have a good opportunity of getting. useful information. He adopted my suggestion and, having made a call at the coastguard station, he returned immediately to inform me that the coastguard station would be evacuated inside a week. As a result of this information, it was necessary to make hurried plans to attack the place. Accordingly, the date for the attack was fixed for the night of September 4th, 1920. It was decided that the attacking party would be drawn from the Letterkenny company. The Volunteers from Fanad company were to act as scouts and guides.

Another of the photos in the above-mentioned CIL Panorama Album D, showing the coastguard station from the lighthouse
Our party set out by motor car from Letterkenny and, on reaching a pre-arranged rendezvous, we were guided across country by Volunteers from the Fanad company. On reaching the coastguard station, which was a solidly constructed cement building, we took up positions behind a wall surrounding the building and about fifty yards out. The light from the lighthouse on the Head was disconcerting to us.
The lighthouse keeper, a man called Meehan, who was friendly, on being accosted, handed over his revolver and extinguished the light. I gave the order to my party to open fire, and, after a burst of rifle fire, I called on the garrison to surrender. After a short delay we got a reply that they would surrender if we would spare their lives. I told them that I had no intention of taking life and ordered them to come with their hands up. This order was complied with immediately. We then moved into the building and collected nine service revolvers. On enquiring where the revolver ammunition was stored, I found that our rifle fire, in the first stages, had cut off the garrison from the ammunition store. On going to that store, we got one thousand rounds of revolver ammunition, some gelignite and a Verey light pistol, with some star shells to fit. We delayed some time with the garrison, and they shared some of their supply of corned beef with us.
We were informed a few day later than a British admiralty sloop was anchored in Mulroy Bay, convenient to the coastguard station. The sloop was there for the purpose or salvaging gold from the ship, "Laurentic", which was sunk in the bay by a German submarine during World War I and had two and a half million pounds worth of gold aboard. For some unknown reason, the sloop had left the bay that night. Had the marines been in the bay and come to the assistance of the coastguards, we would have been in a bad position. Of course, it is possible that the Volunteers from Fanad would have warned us, in advance, of the presence of the sloop, had the sloop remained in the bay. 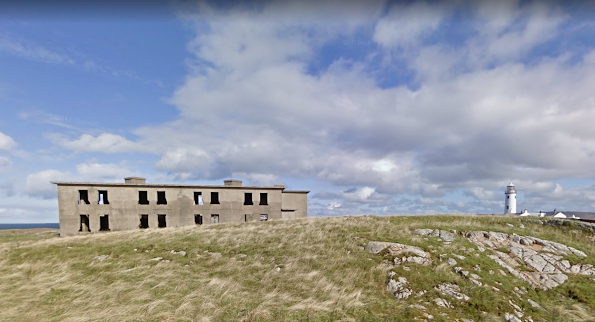 The shell of the Coastguard station at Fanad today

As a lighthouse enthusiast, I have to say that, notwithstanding the political sympathies of Mr. Meehan, I was somewhat shocked that the lighthouse keeper should have extinguished the light. Firstly, it was an absolute cardinal sin to ever allow the light to be extinguished on your watch. Secondly, if there had have been any British boat in the vicinity, the dowsing of the light would surely have alerted them that something was wrong.
The keeper was evidently Charles Meehan, who would have been approaching sixty years of age at the time. A Donegal man, he was a Catholic with a large family. One son, also Charles, would become a lightkeeper too.
Other lighthouses were raided for arms and explosives - Hook Head, Mine Head, Roancarrig, even the Fastnet - but on each occasion, the raiders were very receptive to the notion that nothing should interfere with the beam of the light. As far as I know, this incident was unique in the annals of Irish Lights, although it is doubtful whether news of the incident ever made it into their annals.
About a week later, the coastguards left and the station was burned and gutted. It seems likely from the following newspaper report, that the coastguards got together and concocted a story for the admiralty as to how they had been so easily overcome. I suspect the judge was suspicious! (From the Belfast Newsletter 1st November 1920) 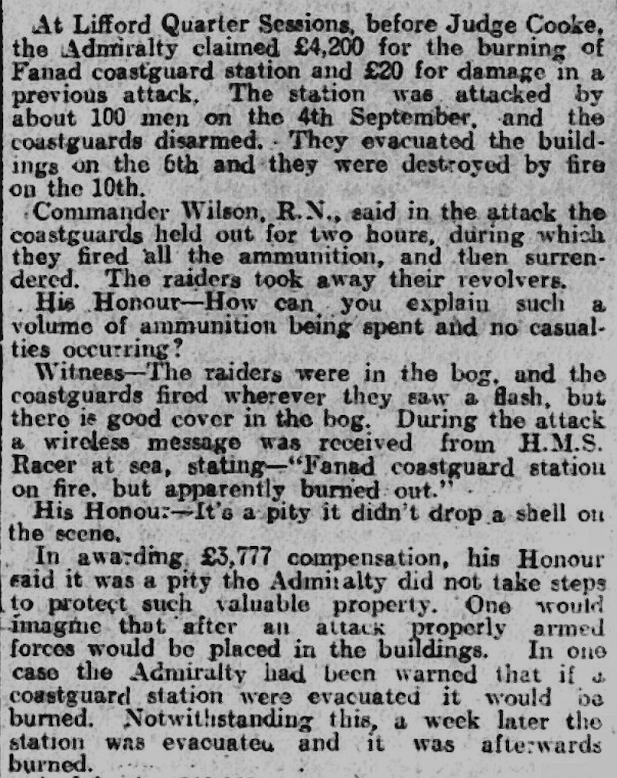 Posted by Peter Goulding at 4:13 PM