A couple of weeks ago, I finally 'bagged' Crookhaven lighthouse, meaning that the only mainland lighthouse I have not visited is St. John's Point in county Donegal. A trip there is therefore in order and while I'm there, I would hope to get good views of Rotten Island and Rathlin O'Beirne.
However, I recently came across another long-lost lighthouse along that stretch of coast, which requires further investigation, mainly because the only information I have on it is a single sentence from a newspaper article 199 years ago. 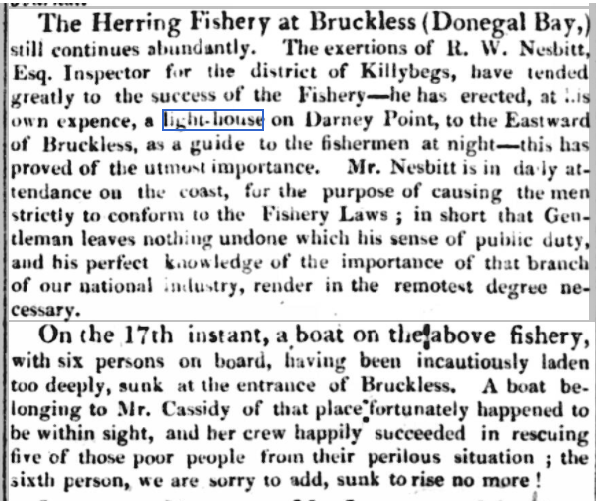 So, now you know as much about the Bruckless lighthouse as I do. Bruckless lies at the head of the bay prior to Killybegs, as per the map below. The lighthouse that is shown adjacent to Carntullagh Head is Rotten Island, a misnomer if ever there was one, which was established in 1838, sixteen years before Nesbitt's long-forgotten aid to navigation. In the second, close-up map of Bruckless Bay from that period, there is no sign of the lighthouse, indicating it must have been quite shortlived. 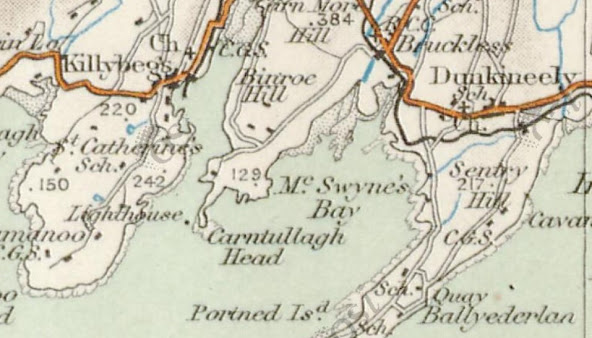 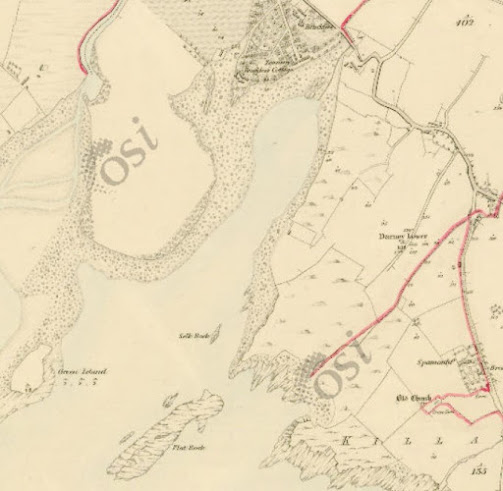 Bruckless Bay 1st edition OS map. Bruckless is at the head of the bay. Darney Point, where the lighthouse was, is near the bottom at the nearest point on the mainland to Flat Rock. A light here would not only serve to warn boats of the dangers of the nearby rocks but would also enable them to continue fishing at night without having to regain Bruckless before it got dark. As such, Mr. Nesbitt's selfless gesture would probably reap dividends through the increase in catches.

The Nesbitts were apparently a Scottish family that moved to this area during the Plantation of Ulster. One of the clan devoted much of his time and energy to catching whales which were common around this coastline. His - and his brother's - enterprise was not a great success until he adapted the harpoon to be fired from a gun, thus inventing the harpoon gun. Personally - and somewhat crassly - the name Nesbitt always reminds me of Buzz Lightyear sucking down Darjeeling with Marie-Antoinette and her little sister.
As for the lighthouse on Darney Point, it seems - according to a post on the Belong to Bruckless Facebook page - that nobody in the community has ever heard of it and in fact one poster denies vehemently that it ever existed. To my mind, it must have been a substantial structure, possibly a wooden hut, with candles burning through a window, though I doubt it was a permanent structure of stone or iron. If it were merely a pillar with a lantern hung around it, I doubt it would have been worth a mention in de paper.
If I were to hazard a guess, I'd say it could well have been similar to the temporary wooden light that was used to mark the end of Dun Laoghaire pier while they were building it. Both it and the Bruckless light date from the early 1820s and I'd guess that the wooden box would have been large enough to provide sleeping accommodation.
It probably didn't last long due to its flimsiness. It may indeed have come down in the first real storm after the newspaper mention. This would explain how nobody on that coast has ever heard of it, seven generations on. Scarcely anybody in Glandore had heard of the lighthouse in that harbour and that only blew down in the 1910s.
As always, if anybody has any information, whether concrete or incidental, it would be most welcome!
Posted by Peter Goulding at 8:00 AM