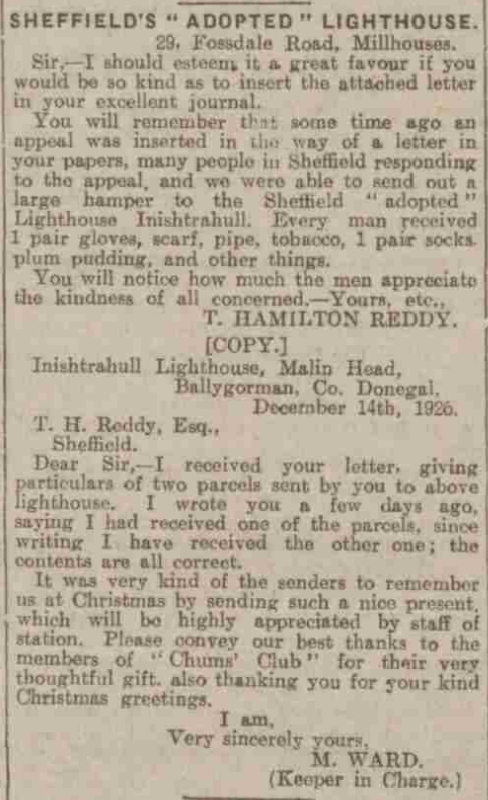 The above extract is taken from the Sheffield Evening Telegraph of Christmas Eve 1926. It would seem that the Missions to Seamen had organised an 'Adopt a Lighthouse' scheme in early 1926, whereby as many large towns all across the United Kingdom should take the physical and spiritual welfare of the Trinity House keepers in hand, sending literature and other goods and a hamper at Christmas. I don't believe it was a very long-lived scheme. The nearby Leeds branch wanted Eddystone Lighthouse as its builder, Smeaton, was a Leeds man but they got Round Island off the Scilly Isles, which slightly disappointed the Lady Mayoress as she had intended to visit the light, presumably at the Council's expense!
18 English, 9 Scottish and 10 Irish rock lighthouses were adopted in this way, with the hope that this would be increased to a total of 52 (including lightships) over time. The Wicklow branch got the Lucifer Lightship. Reigate got the Tuskar. And that's all I could find out about it!
Posted by Peter Goulding at 1:58 AM