Map of Carrickfergus c.1680 shamelessly robbed from the Carrickfergus history website.
I remember in the days of my youth that I used to get excited by going to a gig by the Ramones or the Clash, by a girl acknowledging my existence or by my football team getting into the semi-finals of the Cup.
Nowadays, it seems, I get my kicks from the possible discovery of a 370 year old lighthouse. To borrow a line from a Talking Heads song, "Well, how did I get here?"
The common story about lighthouses in Ireland is that six lighthouses were patented by Sir Robert Reading in 1665 - Old Head and Charlesfort in Kinsale; Hook Head; two at Howth and one at Islandmagee. Before that, there were only ever two lighthouses - Hook and Youghal. The rest of the coast was dark.
I've struggled to accept this for a long time. Doesn't make sense that shipowners would let their ships and their valuable cargoes founder for want of a simple harbour light. I suspect that places like Ardglass and Galway lit fires on the top of castles or towers to guide ships into harbour. But I've never been able to confirm it.
Two weeks ago however, I came across an article by a guy called Colin Johnston Robb from the Belfast Telegraph 13th January 1948. It was an article about lighthouses in Ulster and I have snipped the portion that made me sit bolt upright. 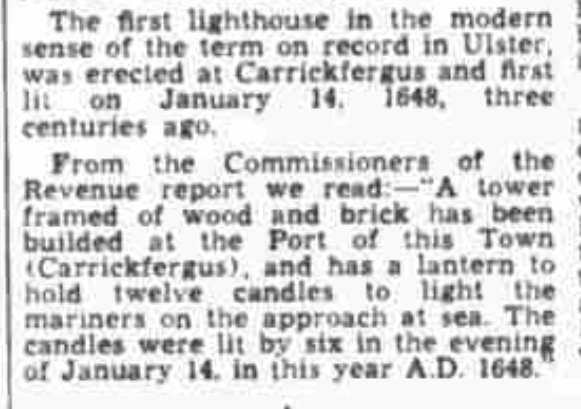 So, if Mr Robb has his facts correct, this was not merely a tower with a brazier on top. This, like Youghal, was a candle-burning light, shining forth from a purpose-built tower. Neither Youghal nor Hook were probably purpose-built (I may be wrong on the latter) so this 'discovery' is quite exciting. For me, anyway. Probably not for a lot of other people.
The sketch at the top of the page is from around1680. The town was always getting invaded and repulsed, because it was a very important place. The sketch seems to be looking south down the coast to the castle and there's a very lighthousey-looking tower next to the castle at roughly the place from where the pier began (out of shot) which might possibly be our boyo. Or the lighthouse could have been knocked down by then.
A few months ago, I 'discovered' a long-lost lighthouse at Cultra near Holywood, only to find, after making enquiries locally, that its existence was well-known in the area.
So, I wrote to the good people at Carrickfergus History who seem to know everything there is to know about the history of their town. I was a bit disgruntled they didn't write back immediately until I realised that I had written to them on 1st April and they may have considered my mail to have been fake news.
So now, I have written to them again.
And I wait.
Posted by Peter Goulding at 10:00 PM