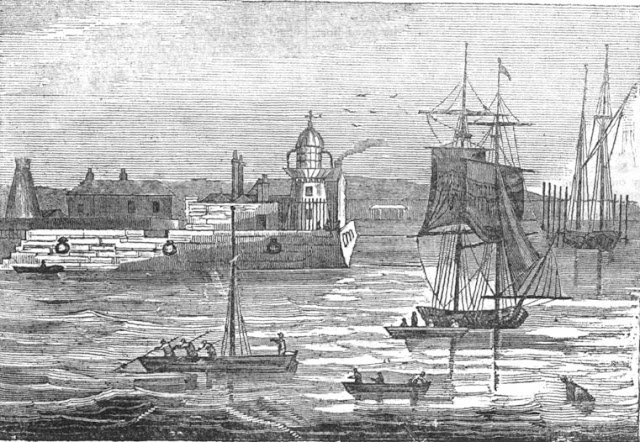 The illustration above comes from the Dublin Penny Journal of 1834 and shows a rather grand lighthouse at the end of the North Wall, near where the Point Depot, or O2 or 3 Arena (depending on your age) is now. Basically, this view is looking across the East Wall Bridge from where the Dodder joins the Liffey (the bridge obviously not yet built!) This was the extent of the north quays in Dublin at the time, before the incredible north bank reclamations and extensions carried out by the legendary Bindon Blood Stoney in the mid 1800s.
(Rather confusingly, the current North Bank lighthouse, near Poolbeg, having been built at the end of the Great North Wall, is also sometimes called the North Wall lighthouse. This lighthouse is two miles upriver from that))
There is evidence to suggest that this light was built in 1809, though the lighthouse directory, which is rarely wrong, dates it back to 1820.
To confuse matters, maritime historian John de Courcy Ireland, writing in 1996, said that "In 1836, the Board issued instructions to build the northwall lighthouse atb the corner of the wall opposite Ringsend. It would replace the earlier watch-house. From this corner, the wall turned north."
The 1834 illustration above clearly shows the lighthouse at the end of the quay and the map below, from the mid 1800s, shows the extent of the quay and the wall turning north.
In my opinion, the picture above is of a lighthouse, not a watch-tower, so de Courcy may have his dates wrong.
An 1877 journal of sailing directions in Dublin port says that "a circular iron lighthouse of a grey stone colour, near the eastern extreme of the north wall, (or quay, which is now in course of extension) ... shaows a fixed white light at an elevation of 29 feet, visible in clear weather at a distance of ten miles, and a sector of red light across the river, to the southward."
When the North Wall extension was completed in the early years of the twentieth century, the lighthouse was replaced by the current North Wall Quay black and white hooped lighthouse. 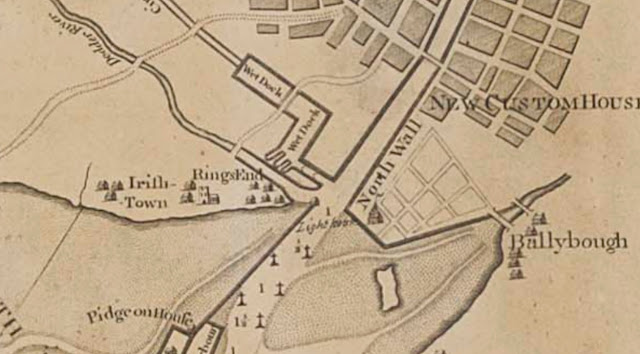 Posted by Peter Goulding at 6:12 AM 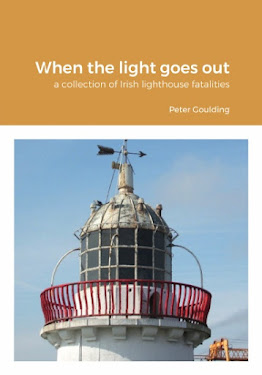 When the Light Goes Out