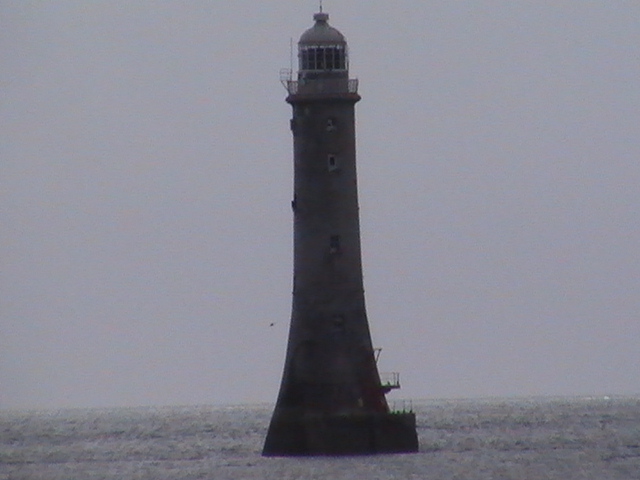 This is another picture to complement the one taken last year on http://irishlighthouses.blogspot.com/2007/08/haulbowline-co-down.html

This picture was taken at the end of Fair Road. Driving from Warrenpoint heading east-ish on the A2, take the right turn signposted for Greencastle. Wind through the countryside for a couple of miles until you come to a few houses and a staggered junction. Turn right (signposted Greencastle) and then 100 yards on, branch left (road marked Fair Road) Where the road hits the beach, all 3 Haulbowline lighthouses are visible.
(A closer view is availabe from Cranfield Point - this can be reached by taking the next right turn off the A2. The photo above only seems larger because it was taken on my camcorder which has greater magnification)

This is quite a striking lighthouse, sitting as it does just offshore where Carlingford Lough starts to narrow. Built in 1824, it was the first Irish offshore light to be automated. Appears to be just in Northern Ireland rather than the Republic.
Posted by Peter Goulding at 8:03 AM