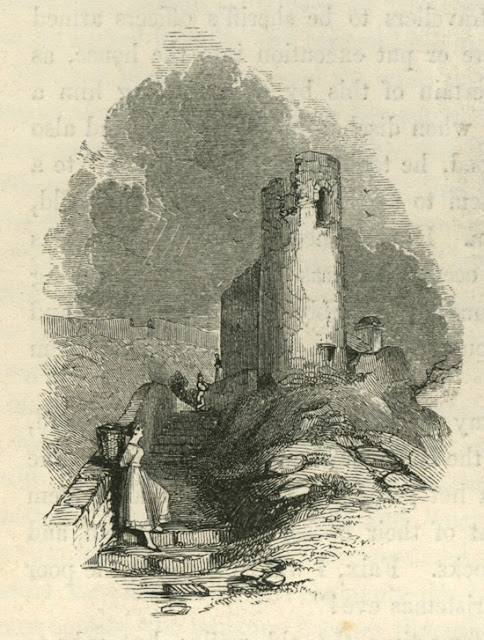 This is the only picture I can find of the original Youghal lighthouse. The current light was erected in 1852 on 'almost' the exact site of this tower which, according to most sources, went up in 1190 or 1202. Youghal had been recently peopled by men-at-arms and traffickers from Bristol, and to ensure mariner safety, a light tower was constructed and placed under the management of the nuns of The Chapel of St. Anne's. The nuns faithfully lit torches to guide ships into Youghal harbour at night until 1542 when the nunnery was abandoned and torn down at the time of the dissolution of the monasteries. The light tower appears to be have been the only part of the building to survive,
The above drawing by William Willes gives a good idea of the lighthouse's appearance, though by that time, the tower had been allowed to deteriorate for nearly 300 years. The roof had perished and the stairs were so decayed that it was dangerous to get to the top of the tower, a portion of which had already collapsed.
The tower was circular, about 24 feet in height (it seems a lot bigger in the drawing unless the people at the top of the steps are only 2 feet tall!) and ten feet in diameter. The only entrance was a narrow Gothic doorway on the water-side. On accessing the door, a flight of spiral steps began on your right hand side, leading up to two  circular-topped windows at the top of the tower, one of which faced the middle of the bay, the other Capel Island. This particular design of window dates the tower to the end of the twelfth or beginning of the thirteenth centuries.