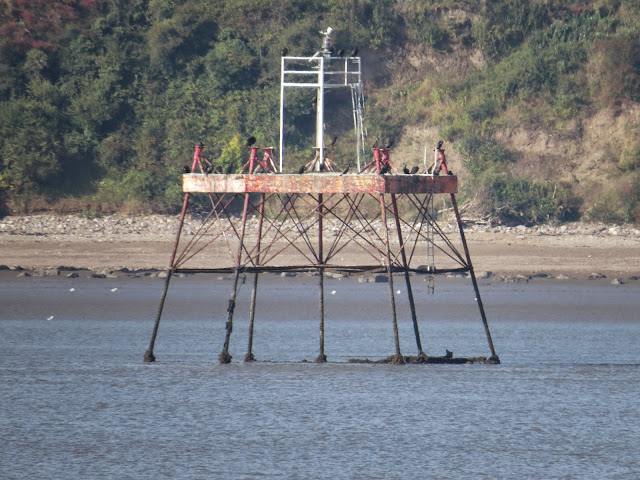 I am indebted to Andrew O'Doherty, who writes the brilliant "Waterford Harbour Tides 'n' Tales " blog  for drawing my attention to an excellent post of his on the Passage Point Light, which I visited in 2014 and which appears in a sorry state of disrepair.
There are only four such screwpile lighthouses left in Ireland - at Moville in Derry, Dundalk Bay, Cobh and here, marking the approaches to Waterford and New Ross harbours. The blind engineer, Alexander Mitchell, who designed the screwpile lights, also took his invention to England, where none survive. America seems to be the only place where they are thriving.
The lights at Cobh, Moville and Dundalk are very well maintained but here at Passage East, the Spider Light (as it is colloquially known) which marks a dangerous bank of sand stretching to the Waterford shore, appears uncared for. A brick support, for example, appears to have been replaced by metal bars. The paint is peeling and one can see, in years to come, that it will be replaced by one of those soulless poles with a light on top. It is already halfway there.
As a country, an Taisce and the like seem to be keen to preserve every old post office and bank but turns a blind eye when it comes to lighthouses. Greenore in co. Louth has been left to the elements. Castlemaine Beacon fell into the sea. The old lights at Inish Mor and Cape Clear have been left to the mercy of the elements. The incredibly important cottage lighthouses at Loop Head and the Old Head of Kinsale lie derelict.
Lighthouses are a valuable part of our maritime history and deserve our protection too. The Spider Light will be 150 years old next year and it would be a great boost, not only to the area, but also to those of us who care about our maritime history, to see it restored to its former glory.
Posted by Peter Goulding at 1:18 AM