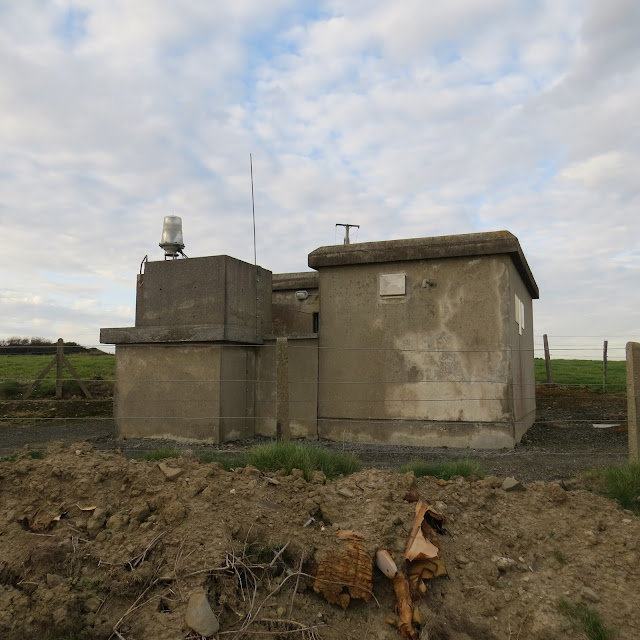 Lighthouse enthusiasts who like their lighthouses to be the classically tapered variety will doubtless be disappointed with the front leading light of the Corlis Point range on the north bank of the Shannon estuary. Dedicated lighthouse lovers only need apply because it is also one of the most difficult to access. 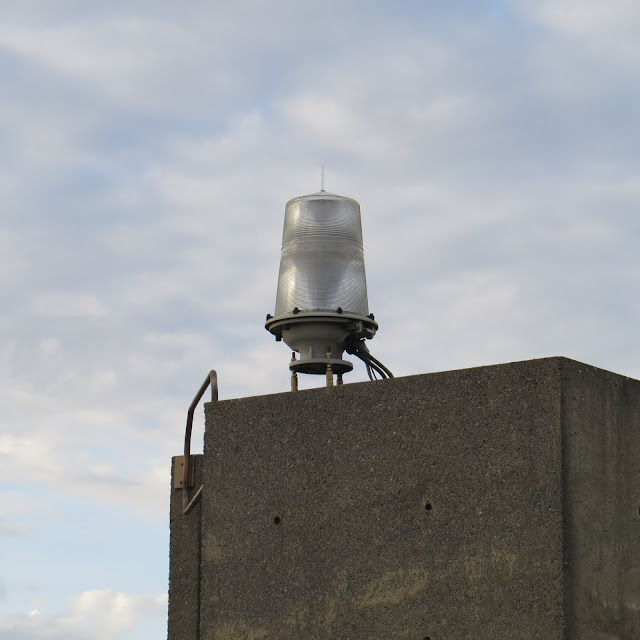 You will probably be driving from Kilkee, so from there head south to Querrin and Querrin Quay. This is where the rear leading light is, a large skeletal structure. From here, take the coast road, with its large area of wetland to its left. The road comes inland slightly. Shortly after a small cemetery, you reach a T-Junction, where you turn left, back towards the coast. Shortly after this, the tarmac stops and you're better off parking up and continuing on foot. The 'road' is very wet and muddy but after 200 meters, you reach the shore. (Incidentally, if you arrive during a spring tide, the path may be inaccessible!) 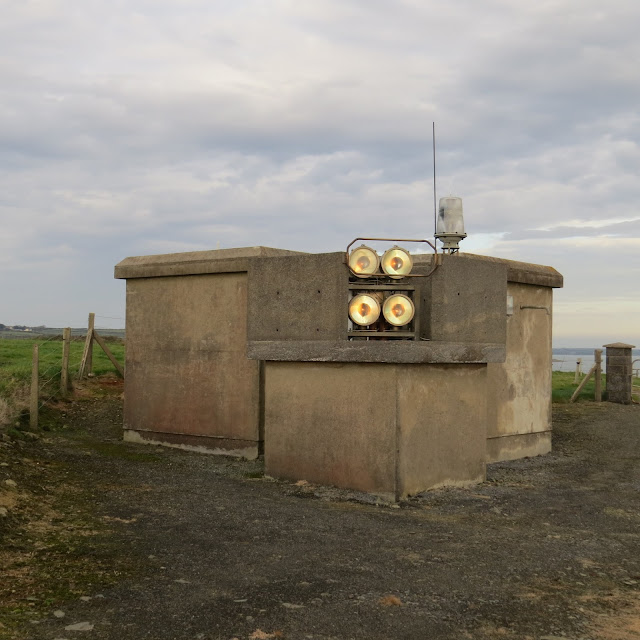 At the shore, turn to the right, scale some shingle onto a small beach. At the other end of the beach, traverse some rock, then more shingle, then another small beach, then some more shingle. By now, you should see the roof of the concrete hut you're aiming for. A wet and slippy path alongside and below the field to the right leads you up to it. 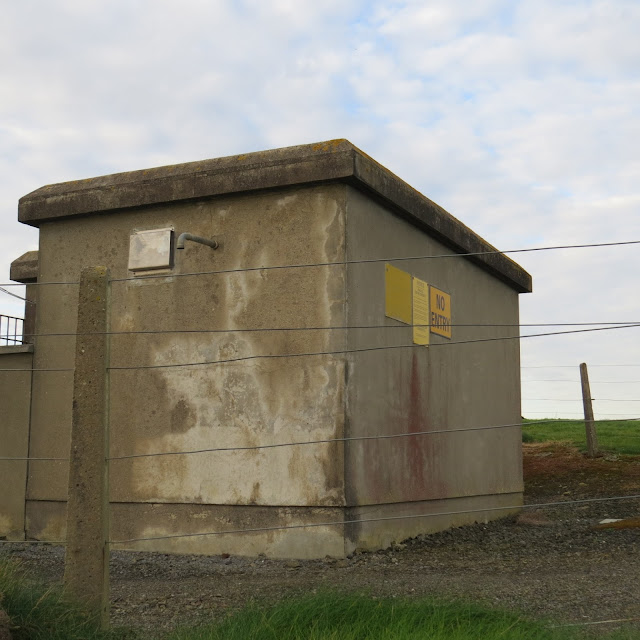 Th hut is about 4 meters high and stands 9 meters above the high water mark. It is home to four large high intensity lights (third picture on this page) which shine for five seconds out of ten. At night, they are replaced by a less intensive single light with the same characteristics. 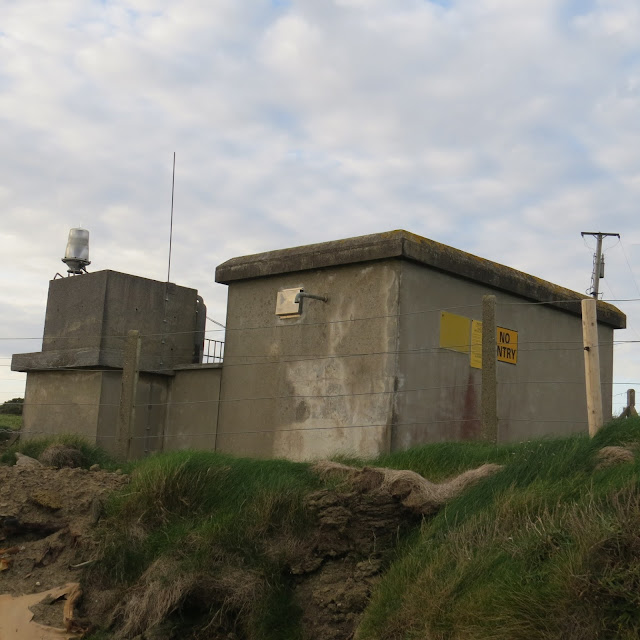 The two lights, this one and the skeletal structure at Querrin pier, help to guide vessels through the entrance to the Shannon estuary. There are rocks and sandbars at the estuary's mouth and large vessels were going to be needed to bring coal to the Moneypoint Power Station. The first idea to get these ships in was to dredge the sand, which would have cost billions. Plan B was to involve the Commissioners of Irish Lights, who, after thorough groundwork, came up with the plan of two lights which, when lined up, would guide vessels through deep water. Nowadays, coal ships of up to 175,000 tonnes dwt regularly use the channel to access Moneypoint. The record, so far, is 189,000 tonnes. The CIL page has further information. 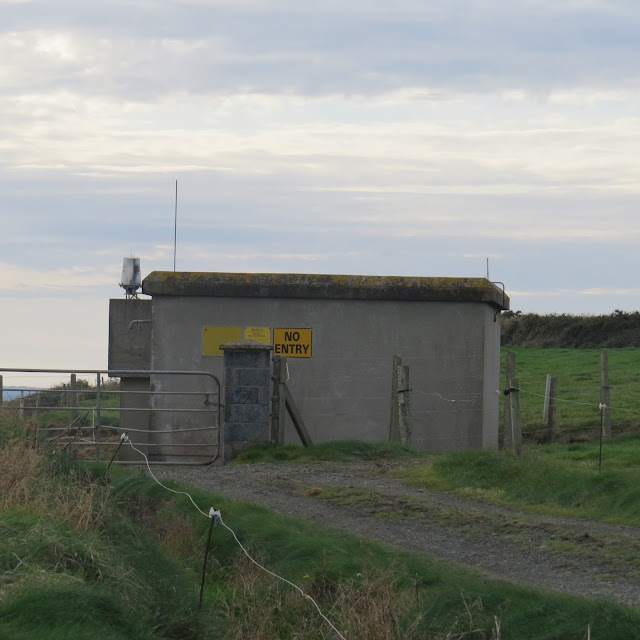 Though I may complain about the accessibility of this light, fact is, when it was being constructed, the ground around was so wet that supplies had to be landed by helicopter. The two lights first exhibited on 20th September 1998. There does appear to be a track leading to the hut (see above)but I have no idea how to find it and it's probably private property anyway. (Checking Google Earth View, it looks like this path originates just after you turn left at the T-Junction I mentioned above)

Posted by Peter Goulding at 2:00 PM